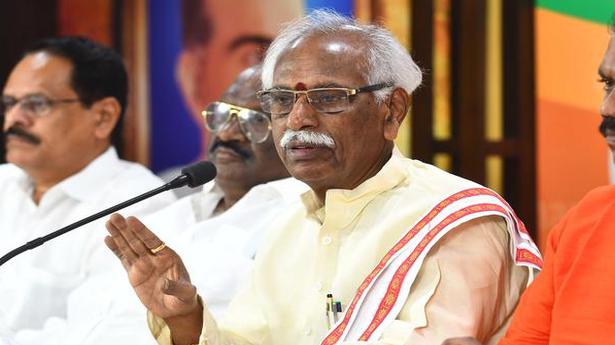 Himachal Pradesh Governor Bandaru Dattatreya had a lucky escape after his vehicle lost control and cut into a ditch, off the NH-65 (Vijayawada-Hyderabad) near Khaithapur village limits of Choutuppal in Yadadri-Bhuvanagiri district.

According to Choutuppal police, Mr. Dattatreya escaped safely and no one, except damages to the official car, suffered any injuries.

The incident occurred around 11.15 a.m, when the vehicle lost control.

Mr. Dattatreya was traveling towards Nalgonda for a felicitation ceremony by local BJP leaders.

He has resumed his journey to Nalgonda, as per schedule.

In his young age, Ki.Ra suffered from poor health and was afflicted by tuberculosis. Ki. Rajanarayanan the grand old man...
Read more
National

The surge in COVID-19 cases in rural areas and the lack of adequate beds in hospitals have led to some out-of-the box thinking...
Read more

In his young age, Ki.Ra suffered from poor health and was afflicted by tuberculosis. Ki. Rajanarayanan the grand old man of modern Tamil literature and...
Read more