Gurjar stir over reservation called off in Rajasthan

Hoshangabad to be renamed as Narmadapuram: MP CM Chouhan 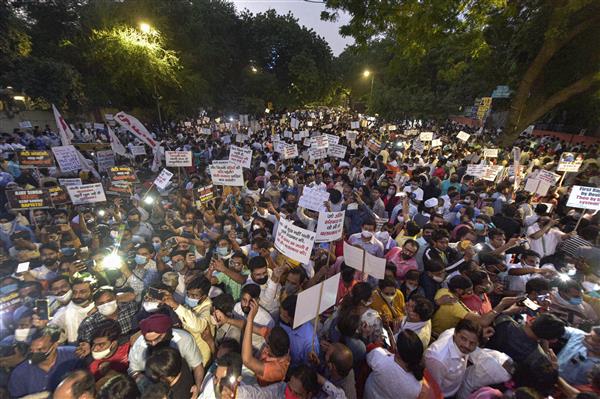 A major Gurjar organisation on Thursday called off its agitation over reservation after reaching a consensus with the Rajasthan government, a community leader said.

The Gurjar Aarakshan Sangarsh Samiti is demanding that the state  government get the Gurjar reservation included in the Ninth Schedule of the Constitution, fill the backlog of vacancies and give the benefit of five per cent quota to the Most Backward Classes (MBCs) in the pending recruitment process.

The Gurjar body had launched the agitation on November 1 and it lasted for 11 days.

Mobile internet services, which were suspended in parts of the state due to the agitation, were restored, police said.

The protestors vacated the railway tracks early Thursday morning and returned home after the agreement was read out to them by their leaders, police said.

After a marathon meeting with a ministerial group on Wednesday, the Gurjar delegation, including Col Kirori Singh Bainsla, met Chief Minister Ashok Gehlot.

However, the delegation had said on Wednesday night that they would take a decision on calling off the agitation at the protest site in Bharatpur’s Bayana.

“A consensus has been reached over the demands with the state government. We have trust that the government will work on the agreement. However, we will take a decision on the calling off of the agitation at the protest site,” Gurjar leader Vijay Bainsla had said after the meeting.

Gurjars had blocked the Hindaun-Bayana road and the Delhi-Mumbai rail route.

On October 31, a delegation of the Gurjar Aarakshan Sangharsh Samiti held discussions with a Cabinet sub-committee in Jaipur, in which a consensus had emerged on 14 points but it was not accepted by Gurjar leader Kirori Singh Bainsla and his supporters. PTI

These ingredients will help soothe your skin’s redness in no time,...

Your flushed skin could be a result of numerous reasons such as embarrassment or you coming back after a heavy workout or even a...
Read more
Trending

Delhi Police release photos of 20 more people in connection with...

Hoshangabad to be renamed as Narmadapuram: MP CM Chouhan