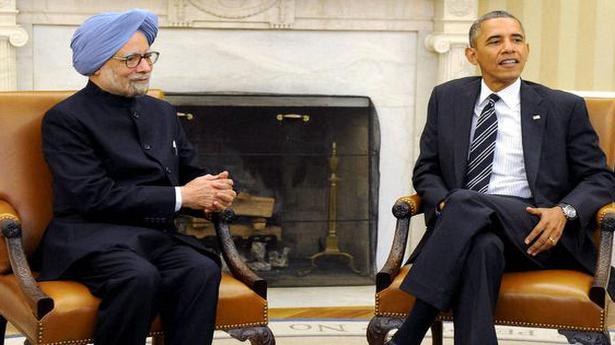 In the first of his two-part memoir, A Promised Land, former U.S. President Barack Obama talks speaks at length about his interest in India, Mahatma Gandhi’s life and his relationship with former Prime Minister Manmohan Singh whom he calls a man of “uncommon wisdom and decency.”

Mr. Obama says he had developed a “warm and productive” relationship with Mr. Singh, describing their interactions in New Delhi on Mr. Obama’s first visit there in November 2010.

“ A gentle, soft-spoken economist in his seventies, with a white beard and a turban that were the marks of his Sikh faith but to the Western eye lent him the air of a holy man, he had been India’s finance minister in the 1990s, managing to lift millions of people from poverty. For the duration of his tenure as Prime Minister, I would find Singh to be wise, thoughtful, and scrupulously honest,” he writes.

(Stay up to date on new book releases, reviews, and more with The Hindu On Books newsletter. Subscribe here.)

“While he [Mr. Singh] could be cautious in foreign policy, unwilling to get out too far ahead of an Indian bureaucracy that was historically suspicious of U.S. intentions, our time together confirmed my initial impression of him as a man of uncommon wisdom and decency; and during my visit to the capital city of New Delhi, we reached agreements to strengthen U.S. cooperation on counterterrorism, global health, nuclear security, and trade,” Mr. Obama says.

The former U.S. President writes that his first trip to India was in 2010 but that the place had always “held a special place in my [his] imagination.”

He says this is possibly due to its “sheer size” with a sixth of humanity and two thousand distinct ethnic groups and over seven hundred languages. Or, he speculates, it could be because he had listened to the Mahabharata and Ramayana during his childhood in Indonesia, or his interest in Eastern religions or because a group of Indian and Pakistani friends in college taught him how to cook dal and kheema, and introduced him to Bollywood movies.

Mr. Obama writes at length about Mahatma Gandhi’s life and his legacy, including the inspiration U.S. Civil Rights leader Martin Luther King Jr. drew from Gandhi’s philosophy. He describes a visit with former First Lady Michelle Obama to Mani Bhavan, where Gandhiji used to stay when in Mumbai [then Bombay].

While Mr. Obama says in many respects India counted as a success story, he is not all praise for the country. He talks about the striking inequality between the rich and poor and says “violence, both public and private” continued to be “an-all-too pervasive part of Indian life.”

“What I couldn’t tell was whether [Manmohan] Singh’s rise to power represented the future of India’s democracy or merely an aberration,” Mr. Obama says.

Mr. Singh’s “restraint” against Pakistan after the November 2011 attacks in Mumbai had cost him politically, Mr. Obama writes.

“He [Mr. Singh] feared that rising anti-Muslim sentiment had strengthened the influence of India’s main opposition party, the Hindu nationalist Bharatiya Janata Party (BJP),” Mr. Obama writes, going on to quote Mr. Singh: “‘In uncertain times, Mr. President,’ the Prime Minister said, ‘the call of religious and ethnic solidarity can be intoxicating. And it’s not so hard for politicians to exploit that, in India or anywhere else.’”

Mr. Obama describes the rise of “illiberalism” in wealthy nations.

“…If I was seeing it even in the United States with the Tea Party — how could India be immune?”

The former President’s descriptions of individuals throughout the book, often include a physical description — this applies to both men and women (for instance, on former French President Nicolas Sarkozy: “he looked like a figure out of a Toulouse-Lautrec painting.”). Mr. Obama describes his meetings with Congress leaders Sonia Gandhi and Rahul Gandhi during his trip to India.

“Both Sonia and Rahul Gandhi sat at our dinner table that night. She was a striking woman in her sixties, dressed in a traditional sari, with dark, probing eyes and a quiet, regal presence,” he writes.

Ms. Gandhi listened more than she spoke, he says, attributing her power to “a shrewd and forceful intelligence.”

Mr. Gandhi however does not fare quite as well in Mr. Obama’s writings.

“As for Rahul, he seemed smart and earnest, his good looks resembling his mother’s. He offered up his thoughts on the future of progressive politics, occasionally pausing to probe me on the details of my 2008 campaign,” Mr. Obama says. “But there was a nervous, unformed quality about him, as if he were a student who’d done the coursework and was eager to impress the teacher but deep down lacked either the aptitude or the passion to master the subject.”

The book takes us to 2011, towards the end of Mr. Obama’s first term. Presumably, it is for this reason, the author does not discuss Prime Minister Narendra Modi, who became Prime Minister in 2014 and hosted Mr. Obama in New Delhi at the Republic Day celebrations. A second volume of Mr. Obama’s memoirs is expected, although no release date has been announced.

Now rumours against Covid-19 vaccine could get you booked under IPC, but define rumour, ask netizens

Not ‘100% satisfied’ with Maha Vir Chakra awarded to Col. Santosh...

“He should have been honoured with the Param Vir Chakra,” Col. Babu’s father said. The father of late Colonel Santosh Babu on January 26...
Read more
Entertainment

The centre-right Reform Party, chaired by Ms. Kallas, and the left-leaning Centre Party, which are Estonia's two biggest political parties, clinched a deal on...
Read more

Russia had initially introduced the travel restrictions on March 16, 2020 to prevent the novel coronavirus from spreading. Russia lifted a travel ban for...
Read more