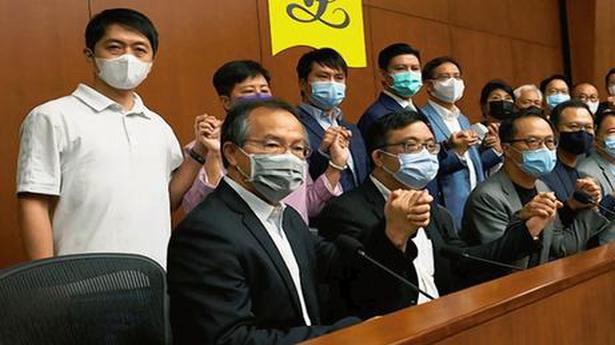 The threat comes as Beijing moves to disqualify 4 of them.

Pro-democracy members of Hong Kong’s legislature will resign “en masse” if Beijing moves to disqualify four of them for violating the city’s Basic Law, the bloc said on Monday.

The threat came ahead of a meeting of one of China’s top law-making bodies, with Hong Kong media reporting that it was considering disqualifying four of the city’s legislators for violating their oaths by disrupting the chamber. “(What) the central government is trying to do with the people’s representatives in Hong Kong is totally ridiculous,” Wu Chi-wai, head of the Democratic Party, said.

Hong Kong’s leader is chosen by pro-Beijing committees, but half of its legislature’s 70 seats are directly elected, offering the city’s 7.5 million residents a rare chance to have their voices heard at the ballot box.

The inability of Hong Kongers to elect their leaders and all of their lawmakers has been at the heart of swelling opposition to Beijing’s rule, including the huge and often violent democracy protests that broke out last year.

A 42-year-old woman, S Kishtamma, a sanitation worker at Gandhi Hospital, Hyderabad, was one among the first beneficiaries of COVID-19 vaccination programme launched across...
Read more
National

If the Left parties, Akali Dal, Shiv Sena, YSRCP, TRS oppose it, the government would not have a majority in the Rajya Sabha: Sitaram...
Read more
Entertainment

NITI Aayog's Committee of Chief Ministers for the Transformation of Indian Agriculture held its last meeting in September 2019. More than a year later,...
Read more

Firefighters confirmed the deadly incident in the town of Lanuvio, with the hypothesis of a gas leak Five elderly residents of a nursing home...
Read more

Operations were focused on about eight locations in the hardest-hit city of Mamuju, where people were believed to be trapped. Damaged roads and bridges, power...
Read more
Bharat News