How Pakistan fake-prosecutes terrorists, only to fool FATF and world [Details] 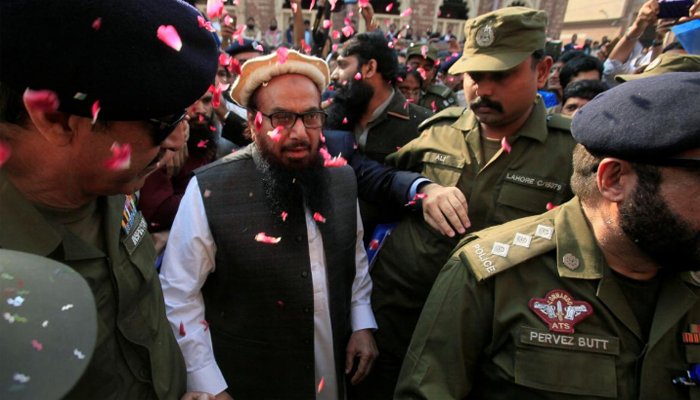 Mumbai terror attack mastermind has been sentenced to 10 years in two terror cases by an anti-terrorism court in Pakistan.

According to agency reports on Thursday, Saeed, along with his two aides – Zafar Iqbal and Yahya Mujahid – have been sentenced to 10-and-a-half years each, while his brother-in-law Abdul Rehman Makki has been sentenced to six-month imprisonment.

However, this is not the first time when the head of Jamaat-ud-Dawa, a front organisation for the terror group Lashkar-e-Taiba (LeT), has been sentenced in a terror case by a Pakistani court. In February, Hafiz Saeed and some of his aides were convicted and sentenced to 11 years in a terror-financing case.

Saeed is wanted in India for planning the attack in Mumbai in 2008 when 10 terrorists killed 166 people and injured hundreds more. He has also been designated as a “global terrorist” both by the United Nations and the United States, who has further put a bounty of $10 million on his head.

But most importantly, the judgment has come just weeks after the Paris-based Financial Action Task Force (FATF), on October 24, in its plenary meeting decided to keep Pakistan, once again, in its ‘grey’ list category till February 2021 as it has failed to fulfill the six key obligations of the global money laundering and terrorist financing watchdog that includes failure to take action against two of India’s most wanted terrorists Maulana Masood Azhar and Saeed.

This shows that the mystery and subterfuge that surrounds Pakistan will never end and the country will keep sponsoring and harboring terrorists on its soil while befooling the watchdog with its hasty decisions at the same time.

From publicly eulogizing globally wanted terrorist Osama Bin Laden to funding terrorist organizations, Pakistan has also been trying to ‘virtual erase’ or relocate some of the most embarrassing terrorists. In one of the incidents, shortly after Indian fighters hit Jaish-e-Mohammed terrorist facilities in Pakistan in February 2019, rumours began to circulate that Masood Azhar, Jaish chief, was dead. Indian agencies pooh-poohed this publicly.

Then came the news that Azhar was ‘very ill’ and was admitted to an Army hospital in Rawalpindi. In July came further news of a blast in the hospital that killed ten. As of early 2020, Pakistani authorities were still talking of his ‘kidney ailment’ and barring any contact with the media, even as they told the FATF that he and his family were ‘missing’.

In a second case, Pakistani officials confirmed in February 2020, that Ehsanullah Ehsan of the Tehreek-e-Taliban – who probably surrendered in 2017 –had escaped custody. Again, the rumour mills put him in Turkey.

Saeed was arrested in Pakistan in July last year in connection with terror-financing cases after international pressure built up on Pakistan to come clean.

To further substantiate the fact, a report from CastelliumAI, a US company headed by former senior officials from the US Treasury Department and Financial Technology experts reported that, starting March 2020 onwards, Pakistan had drastically cut its list of ‘terrorist’ individuals from 7600 to some 4000, shifting most of these to the ‘De-Notified list’. Surprisingly, all of this happens just before a deadline of the FATF, which had given Pakistan time till June 2020 to clean up its act. Failing this, Pakistan would go into a ‘Black List’, which would mean no generous loans from international bodies, and more importantly, a financial searchlight into all of Pakistan’s suspicious activities both to the west and east.

There will be more probing, and questions will probably be asked as to how this process was done and on what basis in the near future as well. But that doesn’t seem to be effective in stopping Pakistani authorities from sponsoring and harboring terrorists who further create ruckus and destabilize the regional peace and security, especially the politics of Jammu and Kashmir and Afghanistan. And being a highly secretive body, it is expected of the FATF to claim no further details on record. But nobody is likely to be fooled.