I am more happy than sad, says Arundhati Roy 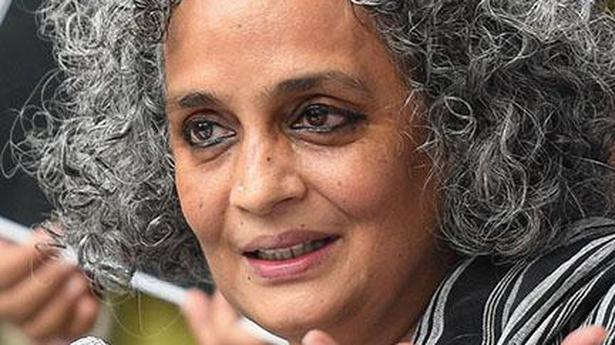 Calls the attitude of the govt. ‘narrow’

Reacting to the withdrawal of her book Walking with the Comrades by Manonmaniam Sundaranar University following objections from the ABVP, writer Arundhati Roy on Thursday said she was more happy than sad about it because she had no idea that her work was part the curriculum, in the first place.

“I am glad that it was taught for several years. I am not in the least bit shocked or surprised that it has been removed from the syllabus now. It was my duty as a writer to write it. It is not my duty to fight for its place in a university curriculum. That is for others to do or not do,” she said.

She said that either way the book had been widely read, and “as we know bans and purges” do not prevent writers from being read. “This narrow, shallow, insecure attitude towards literature, displayed by our current regime, is not just detrimental to its critics. It is detrimental to millions of its own supporters,” she said.

Ms. Roy said it would limit and stunt our collective intellectual capacity as a society and a country, striving for a place of respect and dignity in the world.

"We remain hopeful that an acceptable solution can be found, in order to avoid further prolonging and exacerbating this negative issue for all parties,”...
Read more
Business

Cairn Hopeful Of Solution In $ 1.2 Billion-Plus Tax Dispute With...

<!-- -->This month, Cairn filed a case in a US district court to enforce the arbitration awardCairn Energy Plc said on Sunday it had...
Read more

Several caste associations representing the interest of various communities such as Pillais, Mudaliyars and Chettiars on Sunday held a hunger protest near Valluvar...
Read more

"We remain hopeful that an acceptable solution can be found, in order to avoid further prolonging and exacerbating this negative issue for all parties,”...
Read more

Security forces on February 21 busted a militant hideout and recovered a cache of arms and ammunition in Anantnag district of Jammu and...
Read more
Bharat News