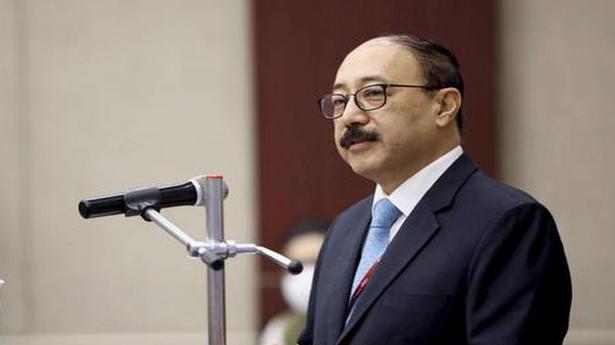 India shares a “very strong” relationship with Nepal and is keen to further strengthen the bilateral ties, Foreign Secretary Harsh Vardhan Shringla said here on Thursday as he began his two-day official visit to the Himalayan nation during which he will hold talks with his Nepalese counterpart and other top leaders.

Mr. Shringla’s was accorded a warm welcome on his maiden visit to Nepal which is happening at the invitation of Nepal Foreign Secretary Bharat Raj Paudyal, amid a strain in bilateral ties following a bitter border row between the two countries.

Interacting with journalists on his arrival at Tribhuvan International in Kathmandu, the foreign secretary said, “I have wanted to come here earlier also, but because of COVID-19 I couldn’t do so. I am very happy to be here. I was here in Kathmandu earlier too, though this is my first visit to Nepal as a Foreign Secretary. We have very strong relationship. Our endeavour will be to see how we can take that relationship forward“.

The Hindu explains: Why are India and Nepal fighting over Kalapani?

“I would like to thank the government of Nepal, the foreign secretary for the warm hospitality extended to us. We have some very good meetings ahead of us and we will look forward to how that goes. My first meeting will be with the Nepalese Foreign Secretary and then I will meet Foreign Minister Pradeep Gyawali. I will also hold meetings with high dignitaries in Kathmandu,” he said.

Mr. Shringla’s visit will be a continuation of the regular exchange of high-level visits between the two friendly neighbours, the Nepalese Foreign Ministry said in a statement this week.

Mr. Shringla is also scheduled to call on Prime Minister K.P. Sharma Oli and President Bidya Devi Bhandari on Thursday. On Friday, he will give a lecture on India-Nepal relations at Hotel Soaltee Crown Plaza in Kathmandu and will inspect three schools built under Indian assistance at Gorkha, the epicenter of the 2015 earthquake, it said.

He will also hand over COVID-19-related support to the Government of Nepal before wrapping up his two-day visit on Friday.

Prime Minister Narendra Modi had pledged to construct 50,000 houses in Gorkha, the epicentre of the 2015 earthquake.The construction of forty thousand houses has already been completed there.

Mr. Shringla will also inaugurate a Buddhist monastery in Manang district situated in remote mountainous region of Nepal near Tibetan border, which was renovated under India’s assistance.

Earlier this month, Indian Army chief Gen. M.M. Naravane travelled to Nepal on a three-day visit during which he held talks with Nepal’s top leadership and discussed bilateral relations

During the visit, he called on Prime Minister Oli, who is also the Defence Minister of Nepal. Oli told him that problems between Nepal and India would be resolved through dialogue.

The ties between the two countries came under strain after Defence Minister Rajnath Singh inaugurated an 80-km-long strategically crucial road connecting the Lipulekh pass with Dharchula in Uttarakhand on May 8.

Nepal protested the inauguration of the road claiming that it passed through its territory.

Days later, Nepal came out with the new map showing Lipulekh, Kalapani and Limpiyadhura as its territories.

After Nepal released the map, India reacted sharply, calling it a “unilateral act” and cautioning Kathmandu that such “artificial enlargement” of territorial claims will not be acceptable to it.

In its reaction, after Nepal’s Lower House of Parliament approved the bill, India had also termed as untenable the “artificial enlargement” of territorial claims by the neighbouring country.

India had said Nepal’s action violates an understanding reached between the two countries to resolve the boundary issues through talks.

Mr. Wei is likely to arrive here on Sunday on a four-day official visit, though the date of the trip is yet to be officially announced.

Share
Facebook
Twitter
Pinterest
VK
WhatsApp
Previous articleBhima Koregaon: Court pulls up prison officials for not replying to Dr Anand Teltumbde’s plea for home food
Next articleConstitution Day of India: What is Samvidhan Diwas; history and facts about this day

The High Court of Karnataka on Wednesday directed the State government to ensure that the local authorities and the...
Read more
National

It’s one of the most dangerous countries for journalists trying to do their job properly: RSF The 2021 World Press Freedom Index produced by...
Read more
Trending

Mumbai woman shares her phone number on Twitter for ventilator, gets...

The AstraZeneca vaccines were delivered to Idlib province through a border crossing with Turkey Syria's last rebel-held enclave received its first batch of COVID-19...
Read more

Maximizing the number of Americans vaccinated in the coming months is critical for the White House. The U.S. is set to meet President...
Read more

Russian authorities have stressed that the demonstrations were not authorised and warned against participating in them. Two close associates of Alexei Navalny were detained...
Read more
Bharat News