India will give fierce reply if tested: PM Modi at Longewala Post 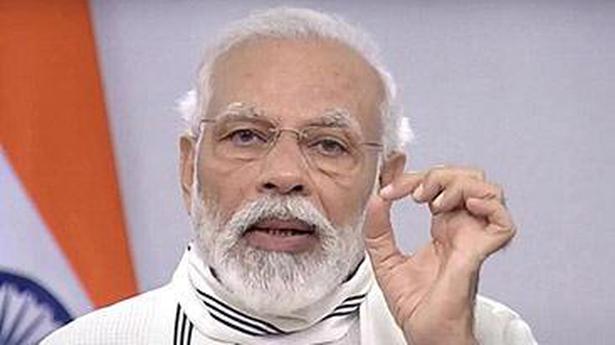 Mr. Modi said, without naming any country, that the entire world feels troubled by “expansionist” forces

Keeping with his practice of spending time with soldiers on Diwali, Prime Minister Narendra Modi on Saturday addressed troops at Longewala Post in which he asserted that India will give “prachand jawab” (fierce reply) if it is provoked.

Mr. Modi said, without naming any country, that the entire world feels troubled by “expansionist” forces and expansionism shows a “distorted mindset” which belongs to 18th century.

“India believes in policy of understanding others and making them understand but if an attempt to test it is made, then the country will give a fierce reply,” he asserted. His message comes amid the continuing standoff with China at Ladakh border.

“No force in the world can prevent our soldiers from protecting our borders,” he said, adding that India has shown that it has strength and the political will to give a befitting reply to those challenging it.

“The world now knows that India will not compromise with its interests even one bit,” he said.

Also read | Adversaries may take advantage if we do not have strong armed forces: Gen. Bipin Rawat

Referring to his custom of celebrating Diwali with soldiers since he assumed office in 2014, Mr. Modi said his resolve to serve and protect the country becomes stronger by spending more time with them.

He also urged troops to innovate, practise yoga and learn an Indian language they don’t know from colleagues.

On the occasion, he recalled the fierce fight the post had witnessed in the 1971 war against Pakistan and paid tributes to Brig Kuldeep Singh Chandpuri, a hero of the battle, saying he became “rashtra deep” with his feat of bravery.

The war was also an example of exemplary coordination among Army, Navy and Air Force, he said.

India had defeated Pakistan in the war, leading to the independence of Bangladesh.

Congress chief spokesperson Randeep Surjewala, however, did not say whether the party will participate in the June 24 meeting or not. Ahead of a...
Read more
- Advertisement -