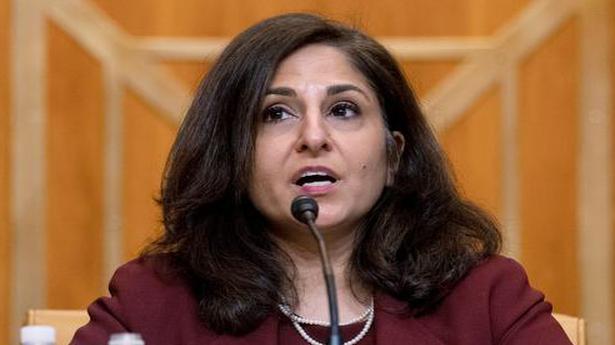 The Indian-American has been entrusted with two tasks – launch a review of the US Digital Service, and plan contingencies that could result from the Supreme Court’s consideration of Republican lawsuits seeking to strike down the Affordable Care Act.

Indian-American Neera Tanden has been appointed senior adviser to U.S. President Joe Biden, two months after she withdrew her nomination as Director of the White House Office of Management and Budget due to stiff opposition from Republican senators.

Ms. Tanden (50) is slated to join the White House on Monday.

She has been entrusted with two tasks – launch a review of the US Digital Service, and plan contingencies that could result from the Supreme Court’s consideration of Republican lawsuits seeking to strike down the Affordable Care Act.

Ms. Tanden is currently the president and CEO of a progressive think-tank, Center for American Progress (CAP).

“Neera’s intellect, tenacity, and political savvy will be an asset to the Biden administration,” CAP founder and director John Podesta said.

He said the White House has made remarkable progress combating numerous once-in-a-generation challenges — from vaccinating millions of Americans to delivering real economic relief from the coronavirus pandemic, and from strengthening the Affordable Care Act to tackling climate change.

“Many of these bold policy solutions, which have bipartisan support from voters across the country, were developed and led by Neera at CAP over many years. The administration’s efforts will be magnified with Neera Tanden on the team,” Podesta added.

Ms. Tanden previously served as a senior adviser for health reforms at the US Department of Health and Human Services. She worked with Congress and stakeholders on particular provisions of former President Barack Obama’s signature legislative achievement, the Affordable Care Act.

Before the 2008 presidential campaign, Tanden served as legislative director in Clinton’s office, and deputy campaign manager and issues director for Clinton’s 2000 Senate campaign.

She began her career as an associate director for domestic policy in former President Bill Clinton’s White House, and senior policy adviser to the First Lady.

They have been set up under Indo-Israel collaboration to help raise farm income, among others Three Centres of Excellence for...
Read more
Entertainment

When a producer expected Neena Gupta to ‘spend the night’ at...

The three-man crew will be in orbit for three months. The first group of Chinese astronauts on Thursday entered the country’s under-construction space station, a...
Read more
National

‘Life of Butterflies’: a documentary that chronicles butterfly behaviour in great...

A riot of colours unfold on the screen as beautiful butterflies flit from one plant to another, in the opening shots of Life of...
Read more
National

Private buses allowed to operate in Kerala on week days

Private buses have been allowed to operate on week days from Friday adhering to the COVID-19 protocol and following the odd-even registration number...
Read more
- Advertisement -

The three-man crew will be in orbit for three months. The first group of Chinese astronauts on Thursday entered the country’s under-construction space station, a...
Read more

The ship’s operator said the wreck of the Singapore-flagged X-Press Pearl “is now wholly sitting on the seabed at a depth of 21 metres...
Read more

creators will also be allowed to design services for creative assets, promote within and outside Clubhouse, and help build an audience. (Subscribe to our Today's...
Read more
- Advertisement -