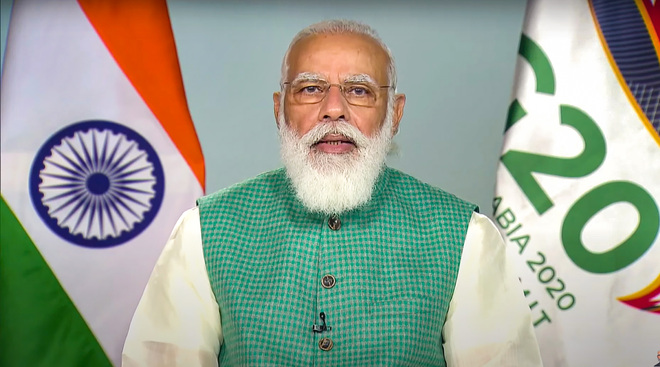 Prime Minister Narendra Modi today exhorted the global community to battle climate change with the same emphasis as it was trying to save people from the effects of Covid-19 pandemic.

“Climate change must be fought not in silos, but in an integrated, comprehensive and holistic way,” he said in a virtual address at the second session of G-20 on climate change. He said the progress on this front could gain pace if there was greater technological and financial support to the developing world.

Respect dignity of every worker

For humanity to prosper, every individual must prosper. Rather than seeing labour as a factor of production alone, the focus must be on human dignity of every worker.

Modi said India was not only meeting its Paris Agreement targets, but also exceeding them. “Inspired by our traditional ethos of living in harmony with the environment, and the commitment of my government, India has adopted low-carbon and climate-resilient development practices,” he said.

“For humanity to prosper, every single individual must prosper. Rather than seeing labour as a factor of production alone, the focus must be on human dignity of every worker,” he added.

US President Donald Trump, however, said the Paris Agreement was “not designed to preserve environment, but to kill American economy”.

Meanwhile, a draft G-20 statement pledged to pay for a fair distribution of Covid vaccines, drugs and tests so that poorer countries are not left out. It also called for extensive immunisation and asked private creditors to join the debt-servicing moratorium for poor countries.

On climate change, the draft statement was similar to PM Modi’s observations: “We recover from the pandemic, we are committed to safeguarding our planet and building a more environmentally sustainable and inclusive future for all people.”

Widespread deployment of such visual AI tools in the heavily regulated banking sector would be a significant step towards their becoming mainstream in corporate...
Read more
National