It is time for Trump to concede: Obama 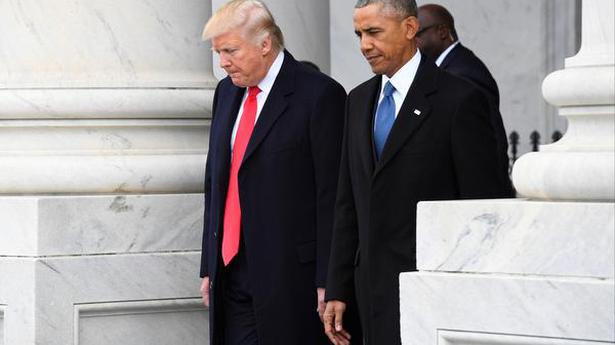 ‘My advice to President Trump is, if you want at this late stage in the game to be remembered as somebody who put country first, it’s time for you to do the same thing’

It’s time for US President Donald Trump to concede to President-elect Joe Biden, as there is no scenario to reverse the outcome of the election, his predecessor Barack Obama has said.

Mr Trump, who is refusing to concede, has 232 electoral college votes. He has challenged the election results in various states including Pennsylvania, Nevada, Michigan, Georgia and Arizona. He had demanded a recount in Wisconsin.

In all these states, he alleged there were massive voters’ fraud and electoral malpractice.

“Absolutely”, Mr Obama told “60 Minutes” of the CBNS News in an interview aired Sunday when asked if in his view, it is time for Mr Trump to concede.

“Well, I mean, I think it was time for him to concede probably– the day after the election– or at the latest, two days after the election. When you look at the numbers objectively, Joe Biden will have won handily. There is no scenario in which any of those states would turn the other way, and certainly not enough to reverse the outcome of the election,” Mr Obama said.

More than the courtesy of a concession, the Trump White House is declining to free up the usual funds and facilities for the incoming administration. President-elect Biden is not receiving secret national security briefings as Trump did when he was president-elect, Mr Obama alleged.

Asserting that a president is a public servant, Mr Obama said that they are temporary occupants of the office, by design.

“And when your time is up then it is your job to put the country first and think beyond your own ego, and your own interests, and your own disappointments. My advice to President Trump is, if you want at this late stage in the game to be remembered as somebody who put country first, it’s time for you to do the same thing,” he said.

Responding to a question, Mr Obama said that America’s adversaries have seen the country weakened, not just as a consequence of this election, but over the last several years.

“We have these cleavages in the body politic that they’re convinced they can exploit. There’s an old adage that partisan politics should stop at the water’s edge, right? That, when it comes to our foreign policy, that it is the United States of America, not the divided states of America,” Mr Obama, whose latest book The Promised Land hits the market later this week, said.

“We have gone through a presidency that disregarded a whole host of basic institutional norms, expectations we had for a president that had been observed by Republicans and Democrats previously. And maybe most importantly, and most disconcertingly, what we’ve seen is what some people call truth decay, something that’s been accelerated by outgoing President Trump, the sense that not only do we not have to tell the truth, but the truth doesn’t even matter, he said.

When asked about Mr Trump’s allegations of widespread election fraud, Mr Obama said that the President doesn’t like to lose and never admits loss.

“I’m more troubled by the fact that other Republican officials who clearly know better are going along with this, are humouring him in this fashion. It is one more step in delegitimising not just the incoming Biden administration, but democracy generally. And that’s a dangerous path,” he said.

“We would never accept that out of our own kids behaving that way if they lost, right? I mean, if my daughters, in any kinda competition, pouted and then accused the other side of cheating when they lost, when there was no evidence of it, we’d scold ‘em. I think that there has been this sense over the last several years that literally anything goes and is justified in order to get power,” he said.

“And that’s not unique to the United States. There are strong men and dictators around the world who think that, ‘I can do anything to stay in power. I can kill people. I can throw them in jail. I can run phony elections. I can suppress journalists.’ But that’s not who we’re supposed to be. And one of the signals I think that Joe Biden needs to send to the world is that, ‘No, those values that we preached, and we believed in, and subscribed in– we still believe’,” said the former president.

Mr Obama hoped that the new President can set a new tone.

“That’s not gonna solve all the gridlock in Washington. I think we’re gonna have to work with the media and with the tech companies to find ways to inform the public better about the issues and to– bolster the standards that ensure we can separate truth from fiction. I think that we have to work at a local level,” he said.

Observing that there are a set of traditions that US has followed in the peaceful transfer of power, Obama said that the outgoing president congratulates the incoming president, instructs the government and the agencies to cooperate with the new government coming in.

“And at that point, the outgoing president is a citizen like everybody else and owes the new president the chance to do their best on behalf of the American people. Whether Donald Trump will do the same thing we’ll have to see. So far, that’s not been his approach. But you know hope springs eternal. There’s a promised land out there somewhere,” Mr Obama said.

<!-- -->Reliance Industries was the top drag on the Sensex, it alone wiped out 100 points from the SensexShares...
Read more
World

The vaccination programme for which dry runs were made over the weekend will commence on Friday. Sri Lanka will purchase 2 to 3 million...
Read more
National

Food kit distribution through ration shops affected in Kerala due to...

Minister for Civil Supplies P. Thilothaman said that the technical team had been apprised about the network issue. Technical glitches in the Aadhar-based Electronic...
Read more
National

The Minister said that this move is expected to impact farmers of 12 coastal States. The Minimum Support Price of copra has been increased...
Read more
Trending

Sri Lanka to procure 2 to 3 million doses of COVID-19 vaccine from India: Official

The vaccination programme for which dry runs were made over the weekend will commence on Friday. Sri Lanka will purchase 2 to 3 million...
Read more

Watch | Who is Armin Laschet?