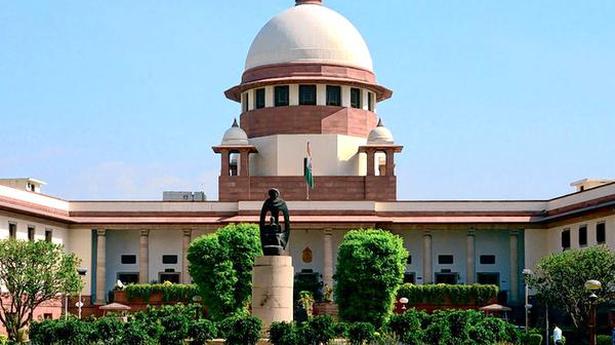 The judge, who leads a three-member Bench, withdrew from hearing the case, explaining that he had, as a lawyer, represented some of the parties involved in the case. Justice Lalit is one of the few senior advocates who was directly elevated as Supreme Court judge in the history of the court.

“I have difficulty in hearing this… I cannot take up this matter. I have as a lawyer represented some of these parties,” Justice Lalit addressed the petitioners.

The Bench then recorded a short order, requesting Chief Justice of India S.A. Bobde to list the case before an appropriate Bench.

The petitions are concerned with a letter by Mr. Reddy addressed to the Chief Justice of India against the judges and the subsequent revelation of its contents during a press conference on October 10.

Also read | A constitutional pickle of the Andhra kind

Mr. Venugopal said it was up to the CJI, who is “seized of the letter,” to take an appropriate decision. Supreme Court advocate Ashwini Kumar Upadhyay, in his contempt plea to Mr. Venugopal, claimed that the decision of a Bench led by Justice Ramana on September 16, directing expeditious completion of pending criminal trials against politicians had spurred Mr. Reddy to write the letter. Mr. Reddy, the lawyer said, had 31 criminal cases against him.

A petitioner-in-person, advocate G.S. Mani, has accused Mr. Reddy of “misusing his official post”. A similar petition has also been filed by an NGO, Anti Corruption Council of India Trust.

The third petition is by another lawyer, Sunil Kumar Singh, who has urged the top court to issue an order to bar Mr. Reddy from making public statements against the judiciary and holding press conferences to malign the judicial institution.

The Constitution does not allow such deliberate attempts to publicly embarrass the judiciary.

“What is at stake is the confidence that courts inspire in the public in a democracy… Discussions can go wild in the media within hours or days and affect the image of the judiciary,” Mr. Singh contended.

The right place to bring allegations against the higher judiciary is Parliament or the State Legislature and not press conferences, he has argued. The petition said the constitutional immunity granted to the judiciary is to allow them to function fearlessly.

One dies as boat capsizes in rough sea off Mangaluru

One person died and six others were missing after their boat capsized in the sea on Saturday.Nine persons left New Mangalore Port in a...
Read more
National

Senior Congress leader and six-time MP from Amritsar Raghunandan Lal Bhatia passed away after a brief illness, his family members said on Saturday. He...
Read more

CM Ashok Gehlot welcomes decision to audit operation of ventilators supplied under PM CARES Fund After the supply of defective ventilators through the PM...
Read more

One dies as boat capsizes in rough sea off Mangaluru

One person died and six others were missing after their boat capsized in the sea on Saturday.Nine persons left New Mangalore Port in a...
Read more
Bharat News