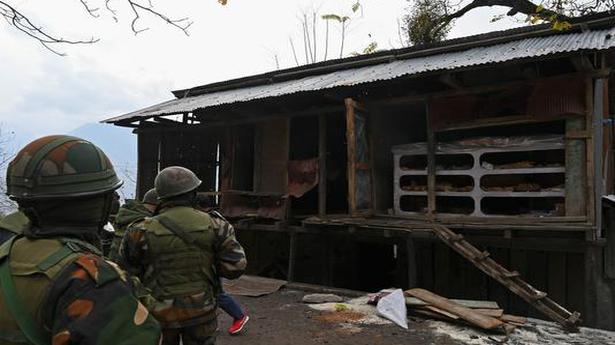 There is no celebration at Raghunathpur village in West Bengal’s Nadia district this Diwali as the people of the area are mourning the death of their neighbour Subodh Ghosh at far away Baramulla in Kashmir.

Subodh was among those killed in the heavy shelling by Pakistan at the LOC at Baramulla in Kashmir on Friday.

He did not live to see his three-month-old daughter.

The 24-year-old jawan was eager to return home for his daughter’s ‘Annaprasan’, a ceremony when a child begins to have rice and other solid food when he/she turns six months old.

“My son was eager to return home for his daughter’s Annaprasan … Now instead of him, his coffin will come. The village is in mourning,” the jawan’s father Gouranga Ghosh, a day labourer, told reporters at his modest home on Saturday.

The body will arrive on Sunday after completion of the formalities, he said.

Recounting the dreadful afternoon when the family got the news of the jawan’s death on Friday, Ghosh said, “There was a call at around 3.30 pm from Jammu and Kashmir. As we missed it my daughter-in-law called back and the person at the other end said they had received the marriage documents of Subodh and was confirming it.

“After 10 minutes there was a second call from the same number and we were informed that Subodh was killed in firing by Pakistan,” he said..

“Subodh was at home for the last time in June this year for 40 days. Due to the lockdown, he was unable to meet friends and relatives at that time. His daughter was born after he left and he was planning to be back home during the ’Annaprashan’ of his daughter,” his mother said.

Subodh spoke to his wife and mother for the last time on Thursday.

The martyred jawan’s father-in-law Tapan Ghosh, who owns a small confectionery, had rushed to his daughter’s home soon after getting the news of Subodh’s death.

“I spoke to Subodh 10 days ago and he had enquired about my health,” he said.

Subodh had married his daughter a year and three months ago.

After passing out from local Nimtala High School, Subodh had taken admission at Betai College but he made it to the Army three years ago.

The family’s financial condition had improved after he joined the Army and Subodh had started to build a pucca house.

District adminsitration and police officials visited the martyred jawan’s house on Saturday and conveyed the official message from Jammu and Kashmir.

The villagers garlanded Subodh’s photograph on Saturday and paid the homage.

“On the day of festival of lights, the village has plunged into darkness,” a villager said.

Poco F3 GT, the smartphone that was speculated to debut as rebranded Redmi K40 Game Enhanced Edition, has now appeared on a US retailer's...
Read more
Business

Harley-Davidson on Monday launched an all-electric motorcycle brand LiveWire, the latest effort by the company to ramp up bets on the rapidly growing electric...
Read more
Technology

Twitter has donated $15 million (roughly Rs. 110 crores) to help address the COVID-19 crisis in India which is battling the unprecedented second wave of...
Read more

COVID surveillance in rural U.P. hit by lack of kits

Asha workers lack both protective gear and testing tools in the State’s drive to identify symptomatic persons “People don’t take us seriously. Why would...
Read more

Covishield, Covaxin made fewer antibodies against B.1.617 variant

Reduced antibodies not a cause of worry on efficacy against COVID-19, say experts Both Covishield and Covaxin, while effective at generating an immune response against...
Read more

COVID cases fall to 4,305 along with tests in Telangana

There has been a further reduction in the number of COVID positive cases in Telangana at 4,305 on Friday as against 4,693 the previous...
Read more
Bharat News