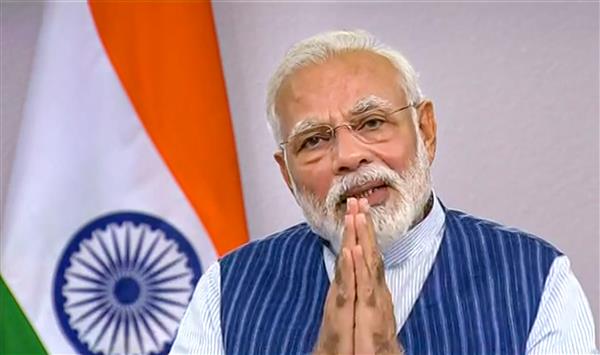 Prime Minister Narendra Modi on Sunday said more than 2.6 crore families, including in Uttar Pradesh, have been provided with piped drinking water in the country under the Jal Jeevan Mission (JJM).

Laying the foundation stone of rural drinking water supply projects in Mirzapur and Sonbhadra districts of the Vindhyachal region of Uttar Pradesh on Sunday via video conference, Modi said they would go a long way in the redressal of water problem of the areas, besides boosting the economy.

“Under the Jal Jeevan Mission, the life of our mothers and sisters is getting easier due to easy water access at the comfort of their homes,” Modi said, adding: “A major benefit off this  has also been a reduction of many diseases like cholera, typhoid, encephalitis caused by dirty water of the poor families.”

The JJM was launched on August 15, 2019, with a target to provided tap drinking water to every rural household by 2024.

The projects, for which the foundation stones were laid by Modi today, will provide household tap water connections in all rural households of 2,995 villages and will benefit about 42 lakh population of these districts.

The Jal Shakti Ministry has constituted “Village Water and Sanitation Committees or Paani Samiti” in all these villages, who will shoulder the responsibility of operation and maintenance of the water assets created.

The total estimated cost of the projects is Rs 5,555.38 crore and are planned to be executed in 24 months.

In a veiled critique of preceding the non-BJP governments in the country’s biggest state, Modi noted that Vindhyachal or Bundelkhand became “regions of deficiencies” despite having resources in abundance.

In spite of having several rivers, these regions were known as the most-thirsty and drought-affected regions and forced many people to migrate from here, he added.

He remarked that when piped water would reach thousands of villages in Vindhyanchal, the health of children of this region would be improved and their physical and mental development would be better.

The Prime Minister complimented the Uttar Pradesh government for providing responsive governance during the time of pandemic and keeping the pace of reforms going.