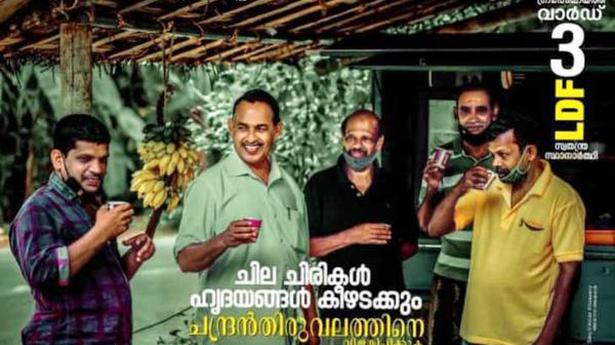 With the pandemic hitting the conventional election campaign out of the park, social media is scoring big.

If a candid smile could win votes then Chandran Thiruvallathu, the LDF-backed Independent from Pillassery ward of Kunnamangalam panchayat in Kozhikode, is probably assured of quite a few by now. A picture featuring Mr. Thiruvallathu with a disarming smile turned such a rage on social media that his campaign team spun a slogan ‘Some smiles win hearts’ around it.

With the pandemic hitting the conventional election campaign out of the park, social media is scoring big. “We are developing digital interactive posters of candidates, a single click on which will take visitors to their diverse social media handles. Most candidates are not aware of the potential of the social media and convincing them remains the biggest challenge,” said Anoop Radhakrishnan, a graphic designer for whom the local body poll has come as a godsend after being hit hard by the pandemic.

Gone are the days when social media campaign was all about a few sporadic posters. Now firms run full-fledged digital war rooms for candidates clubbing together services from reputation management by taking down defamatory posts to boosting paid advertisements in social media.

Forced to prioritise digital strategies, political parties have left no stone unturned. The BJP has prioritised Corporations and has deployed tech teams for all six Corporations with content management teams in all districts.

“We are planning to shake social media through a campaign around the need for a change in Kerala that will explode in five lakh Facebook profiles. Directions have also been given to feature Narendra Modi in all social media campaigns,” said Jeevanlal Ravi, a member of the State IT Vibagh of the party

Not to be left behind, the digital media cell of the Kerala Pradesh Congress Committee has rolled out Jana Shakthi, an internal communication programme, over Telegram. There is a team of 60-odd techies for content generation on digital platforms at the State-level and similar teams at the ward, block, district, and Assembly constituency levels. “This being a local body election, we have adopted a bottom-up strategy giving considerable leeway for grassroots-level content,” said Anil Antony, the digital cell convener.

Photos get a makeover

The social media rage has compelled innovations in conventional campaign tools too. “The new concept of photographs and video bios of candidates in their everyday lives and livelihood environs have caught the public’s imagination. Photographs are now pepped up using innovating lightings and technological tools making them more appealing,” said Arun Chandra Bose, a freelance photographer.

But there are pitfalls too. “The trend of sharing pictures of women candidates on social media platforms with crass sexist remarks is so disgusting,” said Resmi Rajesh, a Malayali expatriate from Abu Dhabi.