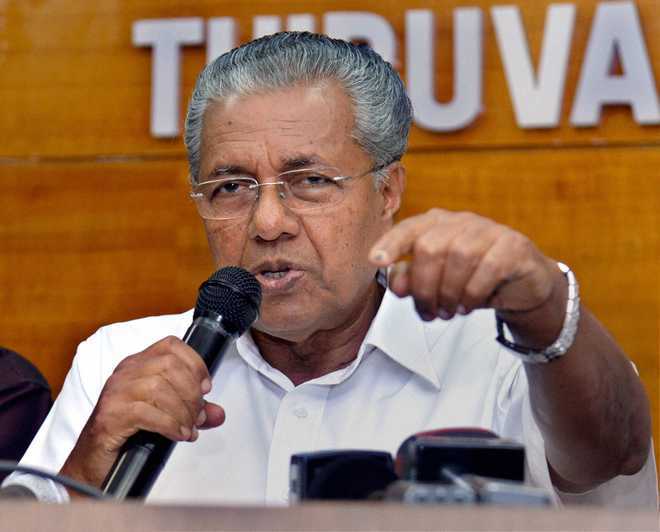 Kerala Chief Minister Pinarayi Vijayan on Sunday said his government would consider creative suggestions on the controversial amendment to the police act providing for up to five years imprisonment to those making defamatory social media posts as the opposition termed it as an assault on freedom of speech.

Amid widespread concerns that it was a tacit move to silence critics and the media, Vijayan said the government has the responsibility to uphold the freedom of the press as well as that of the citizens.

Seeking to allay fears, he maintained that the amendment would not hamper the freedom to criticise.

“The government will certainly consider all creative opinions and suggestions that are being aired with regard to this amendment,” Vijayan said in a Facebook post.

The section stipulates either imprisonment for up to five years or a fine of up to Rs 10,000 or both to those who produce, publish or disseminate content through any means of communication with an intention to intimidate, insult or defame any person through social media.

Defending the move, Vijayan said the government was repeatedly receiving complaints even from prominent public and cultural figures against the wide ‘misuse’ of social media, especially by certain online channels, he said.

“They have brought to the notice of the government instances where inhuman and vile cyber attacks were carried out by some in the guise of journalism and how it even harmed the family lives of many,” he said.

The use of personal likes or dislikes, political or non- political interests and so on to unsettle the peaceful atmosphere of families so as to settle scores arising out of revenge cannot be allowed, the chief minister asserted.

“Along with ensuring the freedom of press, the government also has the responsibility of upholding a citizen’s individual freedom and his/her dignity as enshrined in the Constitution. The popular idea that one’s freedom ends where the others nose begins needs to be respected,” Vijayan said.

Leader of the Opposition in the Kerala Assembly Ramesh Chennithala said the amendment was against the freedom of speech expression which is a constitutional right.

“Amendment to Kerala Police Act shows the intolerance of @vijayanpinarayi government over free speech. This amendment is against the freedom of speech expression which is a constitutional right. The new law is a tacit move to silence critics and media. Nothing more, nothing less,” the senior Congress leader tweeted.

He said the chief minister was trying to scuttle the voice of the Opposition.

BJP state chief K Surendran said the addition of Section 118-A was a move against the freedom of expression of the people of the state.

“There is an undeclared emergency in the state,” Surendran said at a press meet in Thrissur, questioning the need for the new provision under the guise of countering cyber attacks against women.

There were existing laws which needed to be implemented properly to counter such crimes, he said.

Only those who think that it was their freedom to wreak havoc in others lives, can see the new law as an affront on their freedom. PTI