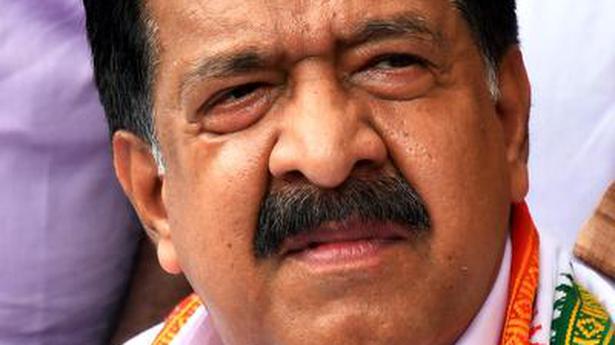 Allegations of bribery were made by hotelier Biju Ramesh.

The Kerala government has reportedly sought the permission of Governor Arif Mohammad Khan to conduct a prefatory anti-corruption inquiry against Leader of the Opposition Ramesh Chennithala.

The inquiry is based on an allegation by hotelier Biju Ramesh that the Kerala Bar Hotel Association (KBHA) had paid ₹1 crore as bribe to the Kerala Pradesh Congress Committee (KPCC) to salvage their business from a proposed crippling hike in bar licence fees during the tenure of the previous Oommen Chandy government. Mr. Ramesh had alleged that KBHA office-bearers had delivered the cash to the KPCC office at Indira Bhavan here. Mr. Chennithala was the KPCC president at the time.

Mr. Ramesh had alleged that in a pre-budget meeting with hoteliers, the then Excise Minister K. Babu had informed them of a proposal to hike the bar permit fee steeply. The KBHA had collected money from its members to bribe the administration and stall the fee hike.

He had alleged that KBHA office-bearers had delivered ₹1 crore to the office of Mr. Babu in the Secretariat. Another KBHA emissary delivered ₹25 lakh at the house of V.S. Sivakumar, MLA. Both leaders have denied the allegation.

CPI(M) acting State secretary and Left Democratic Front convener A. Vijayaraghavan had demanded an inquiry into the allegations raised by the hotelier.

Mr. Chennithala said on Saturday that he was ready to face any probe and added no such acts of intimidation could silence him from exposing the wrongdoings of the Left Democratic Front government.

He claimed that the probe was based on bogus claims originally made by Mr. Ramesh six years ago. A preliminary investigation had now been ordered despite there being no new disclosure, he claimed at a press conference.

The Pinarayi Vijayan government had attempted in vain to breathe new life into a dead and discredited controversy in a futile bid to turn public opinion against the UDF ahead of the local body polls.

Mr. Vijayan’s plot to draw public attention from his follies would prove hollow at the election hustings, he said.

“The complainant had then released an audio clip that was subsequently found to be fake following forensic examinations conducted in the State and in Ahmedabad. The purported revelations had been investigated by both the LDF government and the previous United Democratic Front government. They were dismissed by the Vigilance and Anti Corruption Bureau due to lack of evidence when Jacob Thomas and N. Shankar Reddy were at its helm. The preliminary investigation has now been ordered despite there being no new disclosure,” he said.

He accused the LDF government of scuttling the ongoing probes into the UAE consulate-linked gold smuggling case by misusing its various agencies.

“Such attempts are being made at the Chief Minister’s behest on realising that the Central enforcement agencies are closing in on him. Why has he now changed stance after claiming initially that the investigation was progressing in the right direction,” he asked.

Kerala Pradesh Congress Committee (KPCC) president Mullappally Ramachandran demanded to know why the government decided against investigating Kerala Congress (M) leader Jose K. Mani’s role despite being named by Mr. Ramesh in his complaint. He challenged the Chief Minister to institute a probe into the reported allegations of two of his Cabinet colleagues acquiring benami property in Maharashtra.

A total of 60.71% of the 7.43 lakh voters cast their votes in the byelections to the Sujangarh (Churu), Sahara (Bhilwara) and Rajsamand Assembly...
Read more
National

Our lands are under threat, say Tamils in Sri Lanka’s Eastern...

Two days after its vaccine stock dried up, the State received six lakh doses of Covishield and Covaxin vaccines from the Centre on Saturday....
Read more

With a surge in the number of COVID-19 cases in the State, the demand for medical oxygen has in the last few days shot...
Read more
Bharat News