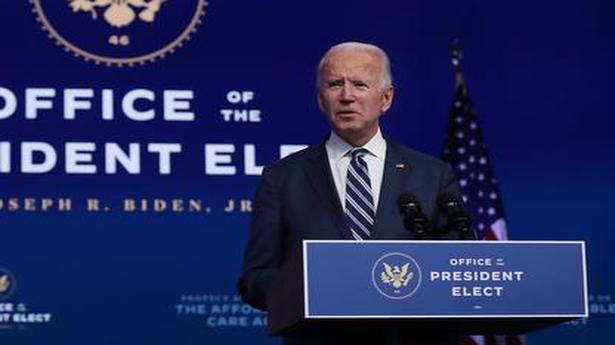 Leaders of Japan, South Korea and Australia joined the list of heads of States or governments who have held congratulatory phone calls with U.S. President-elect Joe Biden, a recognition that Mr. Biden will be in the Oval Office after January 20 even as President Donald Trump has not conceded the U.S. presidential election.

Mr. Suga and Mr. Biden discussed their “shared commitment” on a number of issues, including a commitment to “reinforce the U.S.-Japan alliance as the cornerstone of a prosperous and secure Indo-Pacific region”.

The Quad grouping of countries — India, the U.S., Japan and Australia — was strengthened during the Trump administration, largely as a response to China’s growing assertiveness and adventurism in the region, including along the Line of Actual Control with India. The Biden administration’s approach towards this informal grouping, as well as with China, will be closely watched by India.

On a similar call with President Moon Jae-in of South Korea, Mr. Biden “observed that he looks forward to working closely with President Moon on other shared challenges, from North Korea to climate change”, as per a readout of the phone call. Mr. Biden referred to the U.S.-South Korea alliance as “ the linchpin of security and prosperity in the Indo-Pacific region”, as per his transition team.

Mr. Trump has had three face-to-face meetings with North Korean leader Kim Jong Un — an unprecedented step for an American President — in order to negotiate a peace deal. But talks came to a standstill over issues around American sanctions on North Korea and the latter’s program to develop nuclear weapons.

South Korea is looking towards the U.S. for assistance with ways to de-nuclearise the Korean Peninsula and also to resolve issues around the presence of 28,500 American troops in the country. Mr. Trump had asked South Korea to pay more for the troops, and a cost-sharing agreement that expired in 2019 has not been renewed.

Meanwhile, , would be his new Chief of Staff. Mr Klain, a Democratic operative, worked with Mr. Biden in the 1980s.

He has served as Chief of Staff to two Vice-Presidents — Mr. Biden himself and Al Gore. Mr. Klain had led the White House’s Ebola response during the Obama administration.

Mr. Biden said that Mr. Klain’s “capacity to work with people all across the political spectrum” is “precisely” what he will need at the White House.

The President-elect and his team are preparing for the transition without being able to coordinate with the existing administration, which could throw up certain challenges in terms of preparedness when the new President takes office at noon on January 20. For instance, Mr. Biden has not started receiving intelligence that is shared in the President’s ‘Daily Brief’,which could be a potential national security risk.

Mr. Biden is expected to announce other cabinet picks in the coming weeks.

Bhadravati taluk administration has clamped prohibitory orders in the town for the next three days in view of the...
Read more
Trending

It is home to a wide range of wild animals including tigers and elephants, birds, amphibians and reptiles A massive fire has threatened to cause...
Read more
Entertainment

Can India Catch Up to Global Standards of Digital Safety and...

In the age of a pandemic, digital platforms and social media are fast growing phenomena. The Internet connects over 2.5 billion users worldwide, offering...
Read more

According to the Athens observatory, the epicentre of the quake was 21 kilometres (13 miles) south of the town of Elassona, near Larissa and...
Read more

Twitter’s move to extend the feature to Android users could help give it a lead over Clubhouse app, which is currently available only in...
Read more

Police say it is unclear if the testing center was deliberately targeted. A blast smashed five windows at a coronavirus testing center in a small...
Read more

The country has been in chaos since February 1 when the military launched a coup and detained civilian leader Aung San Suu Kyi At least...
Read more
Bharat News