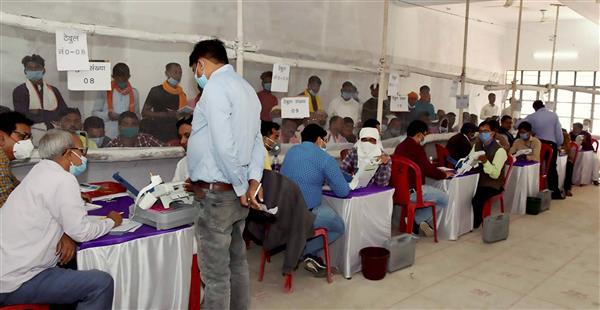 The Left parties alleged on Wednesday that there were “irregularities” during the final stages of counting of votes in the Bihar Assembly polls on Tuesday and said the issue will be raised with the Election Commission (EC) soon.

The parties thanked the voters of Bihar for their support to the Mahagathbandhan.

“This included the candidates of the Left parties, which contributed to the Mahagathbandhan putting up a spirited contest in the election against the ruling BJP-JD(U) and its government.

“The response of the youth and the people to the issues concerning people’s livelihood and employment was heartening,” the statement said.

It also said the difference in the vote share of both the alliances was “very very small”.

While the BJP-led alliance lost 12 per cent votes compared to what it had polled in the 2019 Lok Sabha election, incumbent Chief Minister Nitish Kumar’s Janata Dal (United) won only 43 seats, as compared to the 71 it had won in the last Assembly election, the statement said.

“The CM’s defection from the Mahagathbandhan to the BJP is, amongst other factors, rejected by a large section of the electorate.

“The BJP and Prime Minister (Narendra) Modi raised the communal agenda to a very high pitch and sought to communally polarise the electorate. This was effectively met largely by the Mahagathbandhan’s focus on the economic distress caused by the lockdown and the utter failure of the BJP and its allies in containing the pandemic and galloping unemployment,” it said.

The Left parties said their presence in the Bihar Assembly will be utilised to “advance the cause of the toiling people, raising crucial issues like jobs and on social/economic injustices”.

“The struggles to achieve these objectives shall vigorously continue,” the three parties said.

A stellar performance by the Bharatiya Janata Party (BJP) enabled the ruling NDA to attain a simple majority in the 243-member Bihar Assembly notwithstanding a sharp fall in the tally of the JD(U). — PTI