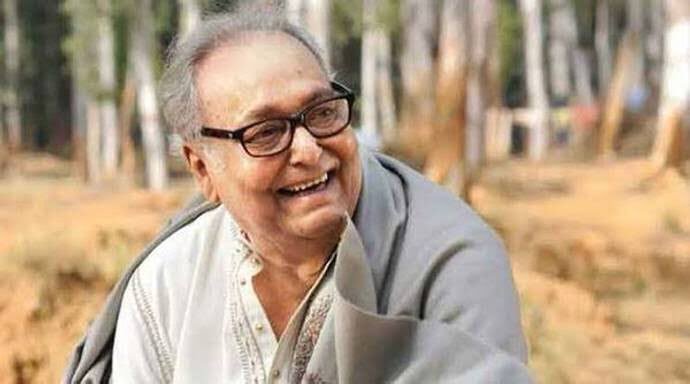 While Chatterjee did play ‘Feluda’ in the two movies made by Satyajit Ray on the fictional detective created by him for his hugely popular whodunit stories, Chatterjee played ‘Apu’ in only one of the three movies known famously as the ‘Apu Trilogy’.

Chatterjee played the grown up ‘Apu’ in the movie ‘Apur Sansar’. This was also the debut movie of Bollywood actress Sharmila Tagore, who played the character of Apu’s wife Aparna.

Tiger Pataudi, the real life husband of Tagore, and Chatterjee were buddies. Recently, Chatterjee, while giving an interview, recalled how he and the ace cricketer went bar hopping in Kolkata in the middle of a test match. Despite the binge the Nawab put up a fine performance the following day and showed that he was not called Tiger for nothing.

“Soumitra seldom missed a test match. He would always be in the stadium if there was a test match. But he did not like watching IPL”, Samabaran Banerjee, former national selector who has captained West Bengal side for Ranji Trophy, and also happened to be a pal of Chatterjee, said.

In his long movie career, Soumitra has never played a cricketer. He, however, put up a memorable performance as a swimming coach in the movie “Kony”.

“He was the last of the Mohicans from the golden era of Bengali films”, award winning filmmaker Gulbagar Singh said.

Chatterjee was admitted to hospital on October 6 after testing COVID positive. His condition steadily deteriorated finally resulting into his death on Sunday. By the time he passed away, his test results for COVID showed negative.

Chief Minister Mamata Banerjee, who visited the hospital after learning about Chatterjee’s death, took an active part in organising an elaborate last journey for the iconic actor. From hospital the body was taken to his residence and from there it was brought to technician’s studio. Before cremation at Keoratola,  the body was kept in state at Rabindra Sadan cultural centre for two hours for people to pay their last respect.

Dr Arjun Dasgupta of West Bengal Doctors’ Forum, when asked if giving a go by to all COVID protocols for the disposal of corpses for the iconic actor, said Chatterjee had tested negative before his death and so observation of the protocol was not necessary.

“All over the world, the protocol regarding disposal of bodies of COVID victims were being relaxed”, Dasgupta told this reporter.

The Bengal government on Tuesday issued a notification saying hospitals and health establishment will face cancellation of licence if...
Read more
National

Twenty-six persons were travelling by the bus from Kurnool when the accident occurred. Passengers of a Vijayawada-bound private bus had a narrow escape after...
Read more
Trending