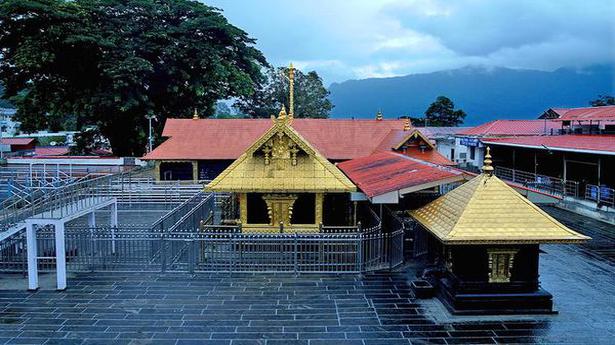 Each day, only 1,000 pilgrims would be allowed to offer prayers.

Wearing masks and strictly adhering to COVID-19 protocols, devotees of Lord Ayyappatrekked the holy hill Sabarimala and offered prayers at the templehere as the shrine opened for the annual two-month-long Mandala-Makaravilakku season on Monday morning.

It is the first annual pilgrimage season at the hill temple after the coronavirus outbreak.

“Sannidhanam”, the temple complex which used to witness a sea of devotees on the first day of the Malayalam month of Vrichikam, saw only few devotees this morning.

Pilgrims were allowed to trek the hills since 3 a.m. from Pampa, the base camp, through a virtual queue system, temple officials said.

Pilgrims from neighbouring states were among the most who flocked to the shrine in the initial hours, Devaswom Board sources here said.

Mask-wearing employees of Travancore Devaswom Board, which manages the shrine and police personnel kept vigil at various points from the base camps to the temple complex to ensure that devotees followed the COVID-19 protocols in a strict manner.

Each day, only 1,000 pilgrims, who have booked through the virtual queue system, would be allowed to offer prayers.

They have to carry COVID-19-negative certificates obtained 48 hours before they reach Nilackkal and Pamba, base camps.

COVID-19 kiosks were opened at the base camps for testing and the pilgrims won’t be allowed to stay at the temple premises, official sources said.

According to Travancore Devaswom Board, about 85,000 devotees would be offering prayers during this pilgrim season.

During Saturdaysand Sundays, 2,000 people would be allowed for darshan and on Mandala pooja and Makaravilakku days 5,000 pilgrims would be permitted, it added.

In view of the pandemic, the Health department has made elaborate arrangements for antigen tests in various centres including all bus stands and railway stations at Thiruvananthapuram, Tiruvalla, Chengannur and Kottayam, where pilgrims arrive to proceed to the Ayyappa temple.

As per COVID-19 protocols, those in the 10-60 age group would only be allowed to offer prayers at the shrine, where lakhs of devotees visit each year during the pilgrimage season.

The auspicious Mandala pooja would be held on December 26.

After the Makaravilakku ritual on January 14, the temple would be closed on January 20, marking the end of the season.

Karnataka HC notice to govt. on appointment of advisers to CM

Parler, a social media website and app popular with the American far right, has partially returned online with the help of a Russian-owned technology...
Read more
National

A cumulative 580 adverse events were reported till Monday, said the Health Ministry. “Two deaths have been reported so far and while one is...
Read more
World

The conversative publisher Regnery announced that Mr. Hawley’s The Tyranny of Big Tech will come out this spring. Sen. Josh Hawley has found a new...
Read more
Entertainment

Add Garth Brooks to the lineup of entertainers at the inauguration of President-elect Joe Biden. “This is a great day in our household,” the country...
Read more

Karnataka HC notice to govt. on appointment of advisers to CM

A cumulative 580 adverse events were reported till Monday, said the Health Ministry. “Two deaths have been reported so far and while one is...
Read more

Fr. Thomas Kottoor, one of the two convicts in the Sister Abhaya murder case, on Monday filed an appeal in the the Kerala...
Read more

Morning digest: Aware of Chinese construction on LAC, says MEA; U.S. and China spar over origins of coronavirus, and more

A select list of stories to read before you start your day Disclaimer: This post has not been edited by our staff and is published...
Read more
Bharat News