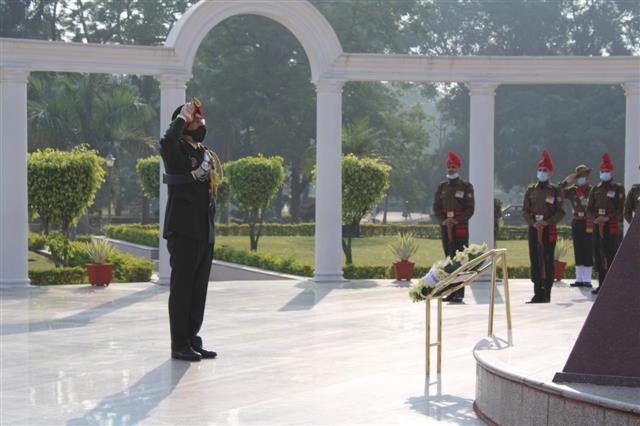 Prior to this he was serving as the General Officer Commanding, 14 Corps at Leh where he oversaw operations, along the Line of Actual Control in eastern Ladakh, and led the Indian delegation during talks with the Chinese to end the ongoing stand-off between the two armies.

He took over from Major General JS Mangat—who has been the officiating commandant since his predecessor— Lt Gen JS Negi superannuated on September 30, 2020.

On joining, he paid tribute at the IMA war memorial in a solemn ceremony.

An alumnus of the National Defence Academy, Khadakwasla, Lt Gen Harinder Singh was commissioned into 9 Maratha Light infantry, one of the oldest regiments of the Indian Army.

A former Services hockey player, he has commanded a Rashtriya Rifles Battalion in the Kupwara Sector.

He has the distinction of commanding two different brigades, including the United Nations Multi-national Brigade deployed in Eastern Congo, and later commanded a mountain division in Kashmir.

Besides tenures in the Military Operations and Operational Logistics directorates, he was instrumental in raising of the Directorate of Indian Army Veterans (DIAV) at the Army HQ.

He has also been an instructor at IMA and the Infantry School, Mhow. He has served as a staff officer at the UN Mission in Angola and excelled in research work at the National Defence College, New Delhi for which he was awarded Colonel Pyare Lal Gold Medal.

He has also been an international graduate fellow at Asia-Pacific Center for Security Studies, Hawaii, USA and has held two fellowships during in his service, one as a research fellow at Institute of Defence Studies and Analysis, New Delhi and the other at S. Rajaratnam School of International Studies, Singapore.

Apex court, in its judgment, clears the air by confirming the wisdom of a Feb. 28, 2019 HC order The...
Read more
National