Mandate is in our favour, says Tejashwi Yadav 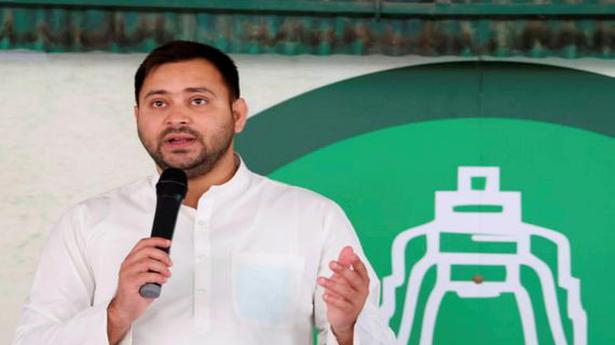 After being elected leader of the Mahagathbandhan (grand alliance) on Thursday, Rashtriya Janata Dal leader Tejashwi Yadav asked the Election Commission on Thursday to release videos and other documentary evidence on counting of postal ballots in 20 seats where the alliance candidates lost by a margin of less than 200 votes.

“We lost about 20 seats where irregularities were resorted to in counting postal ballots and our candidates’ queries were not heard by the Election Commission…we’ve won 130 seats and the mandate was in our favour, but the Election Commission’s results were declared in favour of NDA,” Mr. Yadav told mediapersons in Patna.

“In 2015 too, the mandate was in favour of the Mahagathbandhan, but the BJP grabbed power through the back door. The EC must satisfy the candidates who had raised queries about counting of postal ballots but were not heard…we’re again sending our demand to EC today,” he said.

“I just want to ask a simple question: why were the postal ballots counted at night and were the guidelines followed?” he asked waving copies of the EC guidelines.

Mr. Yadav also wondered why Chief Minister Nitish Kumar had not come out even after winning the poll. Had he quarantined himself again?

“In any case, with what face would he come out after such a dismal performance? I would like to say again that the mandate was in our favour and I express my thanks to the people of the State…I will soon be embarking on a thanksgiving journey across the State,” he said.

CPI(ML) leader Dipankar Bhattacharya blamed the Congress party for the “dismal performance” of the Mahagathbandhan.

Congress leader Tariq Anwar admitted that had the party performed like the RJD and the Left, there would have been a Mahagathbandhan government. “Our performance was not as good… they performed better than us.”

No fear of second wave in Tamil Nadu. says Health Minister While other States in the country are experiencing a...
Read more
World

The attack comes days after over a dozen rockets targeted coalition forces outside Irbil international airport in the Kurdish-controlled region of northern Iraq At...
Read more
National

Fifty-six candidates of recognised and registered political parties died since filing nominations for the elections to the Municipal Corporations and Municipalities / Nagar Panchayats...
Read more

No fear of second wave in Tamil Nadu. says Health Minister While other States in the country are experiencing a slight surge in COVID-19 cases,...
Read more

Chief Minister B.S. Yediyurappa on Saturday informed the Centre that the State government intends to set up a scientific marketing intelligence cell in order...
Read more