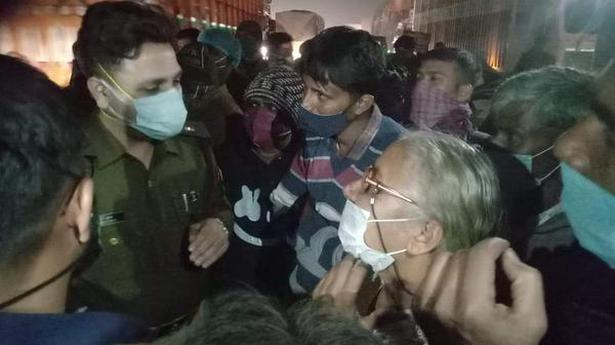 A contingent of farm leaders and protestors from Madhya Pradesh, Karnataka and Maharashtra were stopped by the Uttar Pradesh Police at the Rajasthan border late Wednesday night, and prevented from entering UP on their way to join the Dilli Chalo protest.

The group of 152 protestors, led by Medha Patkar and Pratibha Shinde of the All India Kisan Sangharsh Coordination Committee, spent the night sitting on the highway, surrounded by police officials. An All India Kisan Sabha contingent of 250 protestors from Gwalior is also set to reach the same point on Thursday morning.

“They have not shown us any section of the law or shown any order why we are being detained. We have not been provided any food or water or any other facility,” said Ms. Patkar, in a statement issued in the early hours of Thursday.

In a video message, she added that the Agra SP told them they were being blocked on the basis of orders from the higher authorities, and that he would not be able to do anything until Thursday evening.

The UP Police suggested that the group use a longer route through Rajasthan to reach the Haryana border instead. “This will take 200-250 km extra. We are not foreign funded organisations to spend this much money, and why should we? They can always escort us from this border to that border, and not maybe allow us to remain in UP,” said Ms. Patkar. “But they are instead giving a wrong message, which is anti-farmer…They are not giving any reasoning, they are not even asking us where we want to go and what are we going to do there, what kind of action. We have categorically conveyed to them that we are non-violent satyagrahis.”

“The repressive action of Govt. of UP is condemnable and we would like to ask the Govt. of Rajasthan as to what is their duty towards us when we are illegally stopped by UP Police and we are compelled to sit on Satyagrah on highway itself,” added the statement.

Share
Facebook
Twitter
Pinterest
VK
WhatsApp
Previous articleAshiesh Roy’s sister says she doesn’t have the heart to tell anyone her brother is no more: ‘I can’t utter those words’
Next articleBengaluru horror: 10-year-old girl raped by temple priest in Devanahalli; accused arrested

When S. Nambi Narayanan, a senior ISRO scientist, was arrested on November 30, 1994, on charges of leaking secrets pertaining to the Indian space...
Read more

78.36% electors had exercised their franchise till 5 p.m. in the polling held in 45 Assembly constituencies. High voter turnout and sporadic incidents of violence...
Read more
Bharat News