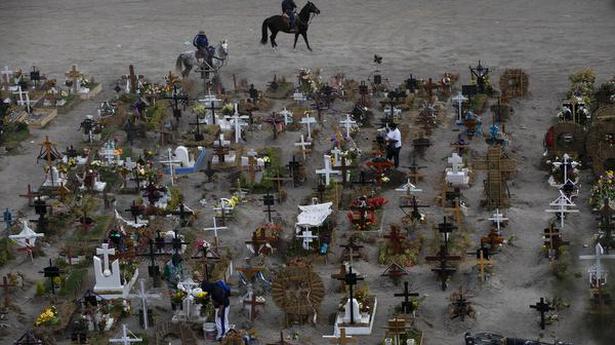 Mexico passed the 1,00,000 mark in COVID-19 deaths, becoming the fourth country to do so amid concerns about the lingering physical and psychological scars on survivors.

The milestone comes less than a week after Mexico topped 1 million registered coronavirus cases, though officials agree the number is probably much higher because of low levels of testing.

The coverage of the back-to-back milestones has raised the hackles of some government officials.

Mexico’s pointman on the pandemic, Assistant Health Secretary Hugo Lūpez-Gatell, bristled when asked about Mexico reaching the 100,000 deaths point, criticizing the media for “being alarmist,” in the same way he has criticized those who suggest the government is undercounting COVID-19 deaths or providing contradictory and weak advice on using face masks.

“The epidemic is terrible in itself, you don’t have to add drama to it,” said Mr. Lūpez-Gatell, suggesting some media outlets were focusing on the number of deaths to sell newspapers or spark “political confrontation”.

“Putting statistics on the front page doesn’t, in my view, help much,” he said.

Besides the trauma of the deaths, many coronavirus survivors say the psychosis caused by the pandemic is one of the most lasting effects.

With little testing being done – Mexico tests only people with severe symptoms and has performed only around 2.5 million tests in a country of 130 million – and a general fear of hospitals, many in Mexico are left to home remedies and relatives’ care.

Such is the case in the poverty-stricken Ampliaciūn Magdalena neighborhood on Mexico City’s rough east side, where most people work off-the-books as day laborers at the city’s sprawling produce market.

The busy market was the scene of one of the first big outbreaks in the greater metropolitan area, home to 21 million people, and so early on in the pandemic local undertakers were swamped with corpses.

The local funeral home “looked like a bakery, with people lined up, with hearses lined up,” said community leader Daniel Alfredo Lūpez Gonzŕlez. The owner of the funeral home told him some people waited to get bodies embalmed for burial while others were in the line to get their relatives’ remains cremated.

The lack of hospitals in some areas and fears of the ones that do exist, along with low levels of testing, has created a fertile breeding ground for ignorance, suspicion and fear.

Mr. Lūpez Gūnzalez described getting the disease himself. Even though he recovered, the fear was crushing.

“It is a tremendous psychosis. In the end, sometimes the disease itself may not be so serious, but it is for a person’s psyche,” he said. “That is, knowing that you have a disease like this can kill you as bad as the disease itself.”

Public health outreach worker Dulce Marţa Lūpez Gonzŕlez – Daniel Alfredo’s sister – nursed four members of her family through COVID-19, relying on phone-in advice and medications from a doctor who was nursing his own relatives.

“I can’t breathe,” she remembers thinking. “And I said to myself, no, it is a psychological question.”

“It is really like a cycle of terror,” she noted. “We were afraid to go to a hospital after everything you hear on social media. It was an enormous psychosis.”

But Ms. Lūpez Gonzalez, whose job involves handing out free surgical masks to residents, has also seen the other side of the psychological maelstrom- those who don’t care.

“I saw this person who I had given a mask to, and I told her she shouldn’t be outside without it,” she recalled. “She told me that no, nothing was going to happen to her. Two weeks later we found out she had died of COVID.”

Kishwer Merchant has been actively sharing her pregnancy journey with her fans on social media platforms. On Sunday, the actor shared a happy picture...
Read more
National

In a letter to PM Modi, veteran Congress leader and former PM Manmohan Singh said one must not look at absolute numbers but the...
Read more
World

Speaker Hammoud Sabbagh said the window for nominations will be open for 10 days starting on Monday. Syrians abroad will vote May 20, he...
Read more

Safety regulators warned people with kids and pets Saturday to immediately stop using a treadmill made by Peloton after one child died and...
Read more
Bharat News