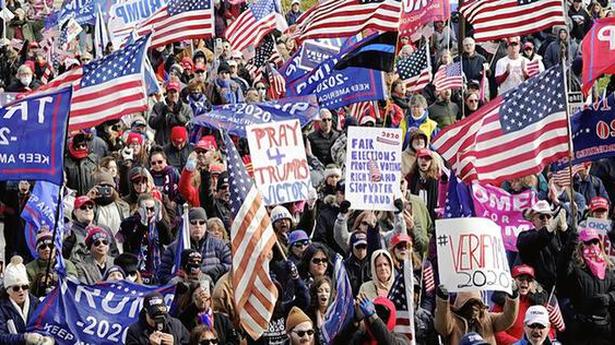 The initial move was quickly condemned by Democrats, election experts and spectators at the Wayne County Board of Canvassers online meeting as a dangerous attempt to block the results of a free and fair election.

“We depend on democratic norms, including that the losers graciously accept defeat. That seems to be breaking down,” said Joshua Douglas, a law professor at the University of Kentucky.

The State vote certification process is usually a routine task, and the ultimate resolution in Wayne County propels Mr. Biden toward formal victory in Michigan. Still, Tuesday’s chaotic developments are likely to sow more doubt among Mr. Trump’s supporters in the election results and could galvanise Republicans in other States to try to look for ways to slow down the final steps in making his loss official.

Republicans are also trying to stop formal certification of the election results in other swing States, including Arizona, Nevada and Pennsylvania.

Mr. Biden crushed Mr. Trump in Wayne County, a Democratic stronghold, by more than a 2-1 margin and won Michigan by 1,46,000 votes, according to unofficial results. His victory reversed Mr. Trump’s surprise 2016 gains in the industrial Midwest and put Mr. Biden on the path to clearing the 270 Electoral College votes needed to win the White House.

Still, Mr. Trump and his allies have launched an array of baseless attacks on the integrity of the election and numerous lawsuits aimed at slowing down the formal vote certification process. Each State certifies its election results and the Electoral College meets December 14 to codify the results.

In Michigan, Mr. Trump allies and Republican poll challengers have spent days launching unsuccessful litigation. They claimed fraud during absentee ballot counting at a Detroit convention center, but two judges found no evidence and refused to stop the canvassing process.

It’s against that backdrop that the Wayne County Board of Canvassers met Tuesday. In a rare and extraordinary move, they did not bless the will of Detroit-area voters. Instead, the panel split in a 2-2 vote, with Republicans voting against certification of the results.

Monica Palmer, one of the two Republicans, said poll books in certain precincts in Detroit — a majority-Black city — were out of balance. Jonathan Kinloch, a Democrat on the panel, said the discrepancies were the result of “human error” and called it “reckless and irresponsible” to not certify the results.

There has been no evidence of widespread voting fraud in Michigan, or in any other State. Federal and State officials from both parties have declared the 2020 election safe and secure.

Still, Mr. Trump has spent the two weeks since Election Day raising false claims of voter fraud and refusing to concede to Mr. Biden. He relished the initial developments in Michigan, tweeting, “Having courage is a beautiful thing”.

But the broader condemnation was swift, including from the meeting’s online spectators, who blasted Ms. Palmer and fellow Republican William Hartmann during a public comment period over Zoom.

Rev. Wendell Anthony, a well-known pastor and head of the Detroit branch of the NAACP, called their actions a “disgrace”.

“You have extracted a Black city out of a county and said the only ones that are at fault is the city of Detroit, where 80% of the people who reside here are African Americans. Shame on you!” Mr. Anthony said, his voice rising.

Ned Staebler, a vice president at Wayne State University in Detroit, said, “The stain of racism that you, William Hartmann and Monica Palmer, have just covered yourself in is going to follow you throughout history”.

Law student Joseph Zimmerman, a veteran, told the canvassers “it breaks my heart” to see them undermine the “sacred right” to vote.

After the meeting, Mr. Hartmann said the intense criticism didn’t cause him to change his vote. Rather, he said he acted because the board had agreed to ask the secretary of state to investigate Detroit’s election results.

Certification of the November 3 election results in each of Michigan’s 83 counties is a step toward statewide certification by the Michigan Board of State Canvassers and the eventual awarding of 16 electoral votes.

“Glad to see common sense prevailed in the end,” Detroit Mayor Mike Duggan said after the Wayne County reversal. “Thank you to all those citizens who spoke up so passionately. You made the difference!”

At least six election-related lawsuits have been filed in Michigan, the latest one landing Sunday in federal court. The issues that Mr. Trump’s allies have raised are typical in every election — problems with signatures, secrecy envelopes and postal marks on mail-in ballots, as well as the potential for a small number of ballots miscast or lost.

On Tuesday, the Arizona Republican Party asked a judge to bar Maricopa County, the State’s most populous, from certifying until the court issues a decision about the party’s lawsuit seeking a new hand-count of a sampling of ballots. In a more rural county, Mohave, election certification was delayed until November 23 in a sign of solidarity with the remaining election challenges in the State.

Mr. Trump’s personal lawyer, Rudy Giuliani, stepped into a courtroom for the first time in decades Tuesday to argue in Pennsylvania that the certification there should be delayed over concerns of voter fraud, though there was no widespread fraud reported.

Delay in getting test reports and patients seeking healthcare are additional factors The demand for medical oxygen seems to be...
Read more
Entertainment

COVID-19 | Some industries declare holiday to break chain of infection

The 516-metre-long bridge hangs 175 meters above the fast-flowing River Paiva. Hugo Xavier became one of the first people to cross the world’s longest pedestrian...
Read more

The incident happened after midnight, and the cause of the stampede was not immediately clear. A stampede broke out early on Friday at a...
Read more

The engagement between the two countries during this period reflects a global comprehensive partnership, State Department spokesperson Ned Price said. The relationship between India and...
Read more

The Health Ministry reported 3,001 COVID-19 deaths in the past 24 hours, bringing Brazil's overall toll to 401,186 — second only to the United...
Read more
Bharat News