‘Minnesota get out and vote’: Trump’s son Eric asks people to cast votes, week after US Elections ended 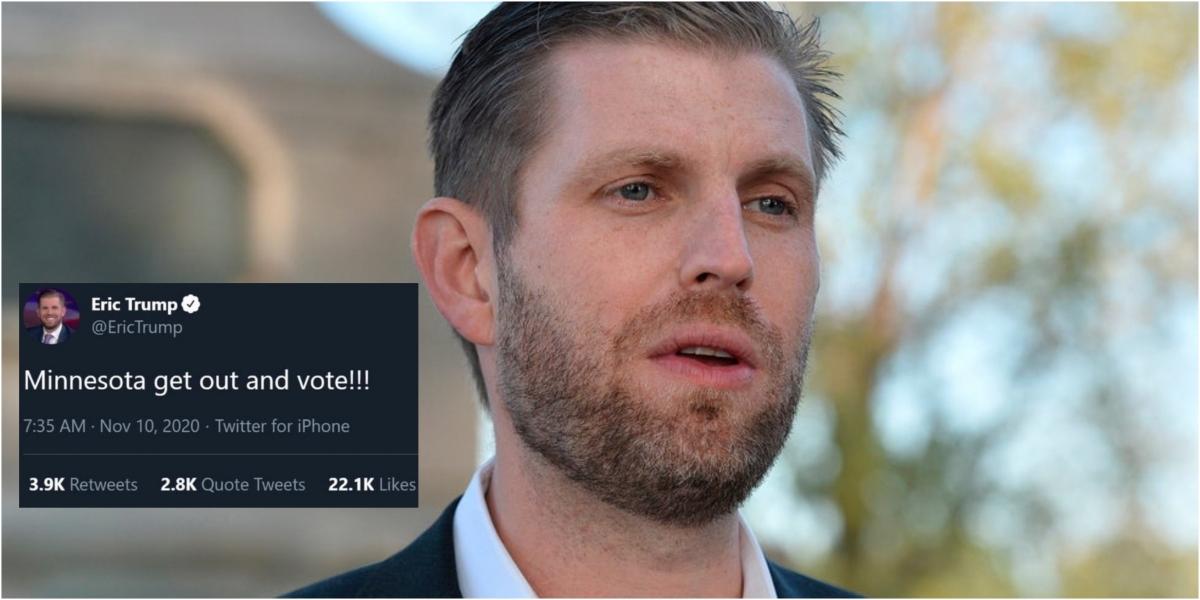 Incumbent US President Donald Trump never fail to make headlines with their statements. This time Eric Trump became a laughing stock after he urged people to come out and cast votes, a week after the election concluded. His father, Donald Trump, has already lost the post of US President to Joe Biden.

Eric took to Twitter and said, “Minnesota get out and vote!!!” The Tweet was eventually deleted but the netizens took a screenshot of it and circulated it as the tweet came a week later as the United States voted on November 3 to choose their next president.

A social media user said that Eric scheduled the tweet for the wrong week. Writer and artist Meg Maker tweeted, “Scheduled post. Someone picked the wrong Tuesday.”  Another netizen said that he thought Eric asked Minnesota to commit voter fraud.  He had tweeted, “Okay, finally got around to making my electoral map prediction.”

The faux-pas drew comparisons with Internet Explorer – Microsoft’s browser that is notorious for its slow performance.

Previously, Trump’s eldest son Donald Trump Jr posted a world map with most countries shaded in red, indicating that his father was going to win. The red colour is used to represent Republicans in the US.

Mamata Banerjee writes to PM Modi, urges him to be fair...

She said the State, which was scheduled to get 70 PSA plants, has now been intimated that four such oxygen generating units would be...
Read more
Entertainment

Sonam Kapoor blocks troll who asks if she took money for...

Sonam Kapoor is strong in not just her opinions, but also actions. She didn’t think twice before blocking a troll that asked her an...
Read more
National

‘The accused was identified as Pradeep Kahar, a resident of Kahar Mohalla in Dandiya Bazaar locality of Vadodara’ Police have detained a 30-year-old disc...
Read more
National

His statement comes a day after the Centre moved the Supreme Court seeking review of the May 5 majority verdict. BJP leader Devendra Fadnavis...
Read more