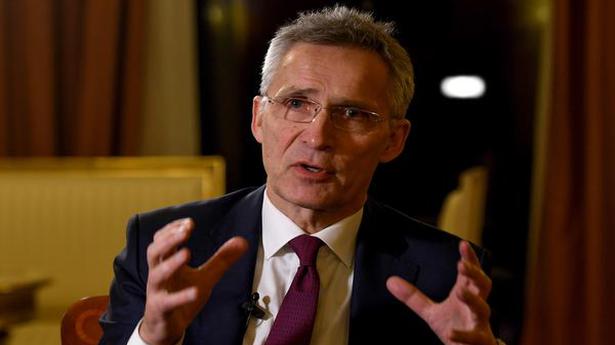 NATO Secretary-General Jens Stoltenberg warned Tuesday that the military organization could pay a heavy price for leaving Afghanistan too early, after a U.S. official said President Donald Trump is expected to withdraw a significant number of American troops from the conflict-ravaged country in coming weeks.

NATO has fewer than 12,000 troops from dozens of nations in Afghanistan helping to train and advise the national security forces. U.S. troops frequently make up about half that number, and the 30-nation alliance relies heavily on the United States armed forces for transport, logistics and other support.

“We now face a difficult decision. We have been in Afghanistan for almost 20 years, and no NATO ally wants to stay any longer than necessary. But at the same time, the price for leaving too soon or in an uncoordinated way could be very high,” Mr. Stoltenberg said in a statement.

Also read | Trump says U.S. has had enough of 19 years in Afghanistan

The U.S. decision comes just days after Mr. Trump installed a new slate of loyalists in top Pentagon positions who share his frustration with the continued troop presence in the war zones. The expected plans would cut U.S. troop numbers almost in half by Jan. 15, leaving 2,500 troops in Afghanistan.

U.S. officials said military leaders were told over the weekend about the planned withdrawal and that an executive order is in the works but has not yet been delivered to commanders.

NATO took charge of the international security effort in Afghanistan in 2003, two years after a U.S-led coalition ousted the Taliban for harboring former al-Qaida leader Osama bin Laden. In 2014, it began to train and advise Afghan security forces, but has gradually pulled troops out in line with a U.S.-brokered peace deal.

Mr. Stoltenberg said that “even with further U.S. reductions, NATO will continue its mission to train, advise and assist the Afghan security forces. We are also committed to funding them through 2024.”

NATO’s security operation was launched after the military alliance activated its mutual defense clause – known as Article 5 – for the first time, mobilizing all the allies in support of the United States in the wake of the 9/11 attacks on New York and Washington.

“Hundreds of thousands of troops from Europe and beyond have stood shoulder to shoulder with American troops in Afghanistan, and over one thousand of them have paid the ultimate price,” Mr. Stoltenberg said.

“We went into Afghanistan together. And when the time is right, we should leave together in a coordinated and orderly way. I count on all NATO allies to live up to this commitment, for our own security,” he said.

They will be aired from 5 p.m. to 6 p.m. every day Following lessons being broadcast on television for students through the COVID-19...
Read more
National

LDF centres its campaign around Pinarayi

From a break from the past, front signals he is the next Chief Minister candidate Feel good videos and inspirational memes released so far...
Read more

A trio of gunmen shot and killed a religious cleric, his teenage son and a student on the outskirts of Pakistan’s capital Islamabad, police...
Read more

Donald Trump returns to the political spotlight on Sunday, determined to regain control of a Republican party that is out of power and pondering...
Read more
Bharat News