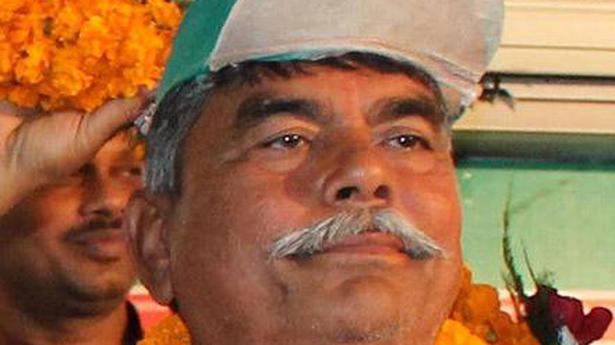 The Bihar ruling National Democratic Alliance and the Opposition Mahagathbandhan candidates on Tuesday filed nominations for Speaker’s post, election for which will be held on November 25.

After filing his nomination papers, Mr. Sinha thanked Prime Minister Narendra Modi and Home Minister Amit Shah for reposing faith in him. “Yet again this reflects that even an ordinary worker in the BJP can achieve great heights,” he said.

Earlier, the name of BJP MLA from Patna Sahib seat Nand Kishore Yadav was doing the rounds in the political circles for the post.

“The post should go to an experienced legislator and our candidate has been a five-term MLA. He knows the proceedings of the House well and has a reputation of taking everyone along,” said RJD leader Tejashwi Yadav. Asked about the numbers, he said, “We’re in touch with other MLAs and seeking their support. I’m hopeful that our nominee will win.”

Deputy Chief Minister and senior BJP leader Tarkishore Prasad said the “convention of unanimous election of Speaker should be maintained.”

Mr. Yadav retorted, “Convention also has it that the Deputy Speaker’s post should go to the Opposition. In the previous Assembly, we kept requesting for it but the post was kept vacant.”

This is going to be the first time since 2005 when the NDA government came to power in the State that the BJP has fielded its candidate for the post as it was earlier bagged by ally JD(U).

‘I would advise all political leaders to think deeply about the consequences of holding large public rallies under the...
Read more
Entertainment

Flavoured milk taxable at 12% under GST: AAR rules in Amul...

The government has sanctioned 162 Pressure Swing Adsorption plants of which 33 had been installed, says Health Minister. Amidst heightened demand for medical-grade oxygen,...
Read more
Entertainment

Sameera Reddy tests positive for Covid-19: ‘Will continue to be our...

Actor Sameera Reddy has tested positive for Covid-19. The actor shared the news with her fans on Saturday evening. Taking to Instagram, the actor...
Read more

‘I would advise all political leaders to think deeply about the consequences of holding large public rallies under the current circumstances,” the Congress leader...
Read more

The government has sanctioned 162 Pressure Swing Adsorption plants of which 33 had been installed, says Health Minister. Amidst heightened demand for medical-grade oxygen,...
Read more

The revised dates will be announced later on at least 15 days before the examination, according to the National Testing Agency. The engineering...
Read more

A total of 22 candidates contested the bypoll, but the main contest is between Rahul Lodhi of the BJP and Ajay Tandon of the...
Read more
Bharat News