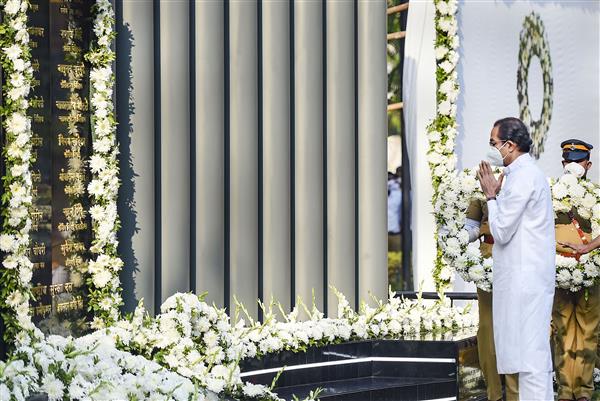 Maharashtra Chief Minister Uddhav Thackeray on Thursday paid tributes to the martyrs of the 26/11 Mumbai terror attack on its 12th anniversary and said the police force needed to be so strong that terrorists did not dare to attack the state or its capital city.

Speaking at the Maharashtra Police headquarters here after paying floral tributes to the martyrs, Thackeray said though the state was facing a financial crisis, his government would take every step to strengthen the police force.

Earlier, Governor Bhagat Singh Koshyari, Home Minister Anil Deshmukh and Environment Minister Aaditya Thackeray also paid respects to the martyrs, who died fighting terrorists during the attack on November 26, 2008, at the newly-built memorial at the police headquarters in south Mumbai.

Wives of some of the personnel killed in the 26/11 attack inaugurated the martyrs’ gallery at the state police headquarters here.

On the occasion, Thackeray released of coffee table book, titled ‘True Grit’ on the Maharashtra Police’s work during COVID-19 pandemic.

“We should make our force so strong that the idea of attack on Maharashtra and Mumbai does not come into the mind of terrorists, they should not dare to attack the state and Mumbai. If any terrorist comes forward, he should be killed on the spot,” he said.

“We woke up about strengthening the police force after the 26/11 terror attack. As we made necessary arrangements for health facilities after COVID-19 outbreak, we can also work to strengthen our police force,” he said.

Thackeray remembered the day of the attack in 2008 when he was on a tour of Dhule and Nashik for poll rallies.

“After getting information about the attack, I had called police inspector Vijay Salaskar and he said he had just reached home and was again rushing to the spot,” he recalled.

“I then made two to three calls to him. When he picked up the call, Salaskar said he was in front of the Taj Mahal Hotel and that the police force will enter it after a survey,” the Chief Minister said.

Salaskar was later killed while fighting with the terrorists.

“Later, I made various calls to Salakar, and till this day, he hasn’t picked up the call,” the CM said on an emotional note.

“When I reached Nashik, I got the shocking news, which I could not have imagined,” he said, adding that the scars of the deadly attack were “irreparable”.

People should be aware of what conditions police personnel were working in, what was the meaning of police, what is their life, he said, adding the concept of martyrs gallery should also be extended to other major cities of the state.

On the occasion, state Home Minister Anil Deshmukh said the 26/11 terror attack was a “national crisis”.

“The black face of the neighbouring country (Pakistan) came to light after the police caught one of the terrorists (Ajmal Kasab) alive,” he added.

At least 797 Maharashtra Police personnel have died in various operations, including Naxal attacks, terror attacks, communal riots, and other official duties from 1965 to 2020, according to the state police.

The 12th anniversary of the deadly terror attack was attended by a limited number of people in the wake of the COVID-19 pandemic.

Family members of some of the martyred police personnel also paid tributes at the memorial.

During the ceremony, the Governor, the Chief Minister and the Home Minister met family members of some martyrs.

“Their sacrifice will never be erased from the memory of time and history. Today, we pay tribute to our saviours #2611Attack #2611Martyrs,” Mumbai Police tweeted.

Remembering their personnel killed in the attack, the Maharashtra Police in a tweet said: “A tribute to the ones who sacrificed their lives to safeguard the rest!”

NCP chief Sharad Pawar also paid tributes to the policemen and other security personnel who laid their lives during the 2008 Mumbai terror attack, and called for a resolve to intensify the fight against terrorism.

“Tributes to martyrs from the police and other security forces who laid their lives in the 2008 Mumbai terror attack. As we condole with the families who lost their near ones in the attack, we should (also) resolve to intensify our fight against terrorism,” the former Union minister tweeted.

On November 26, 2008, 10 Lashkar-e-Taiba terrorists from Pakistan arrived by sea route and opened fire, killing 166 people, including 18 security personnel, and injuring several others during the 60-hour siege in Mumbai.

Nine terrorists were later killed by the security forces, including the NSG, the country’s elite commando force.

Ajmal Kasab was the only terrorist who was captured alive. He was hanged four years later on November 21, 2012. PTI