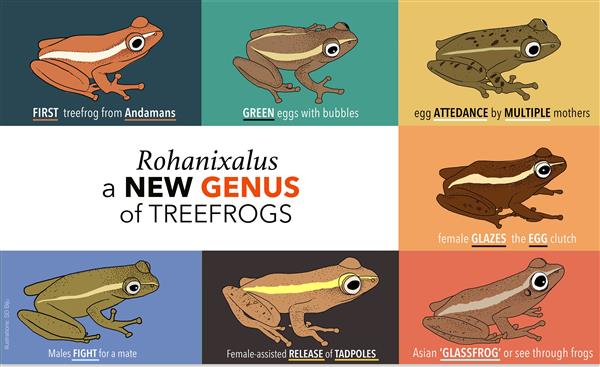 A new genus of the old world treefrog family has been discovered in the Andaman Islands and Northeast India, researchers said on Thursday.

A study led by Delhi University Professor SD Biju, along with a team of researchers from India, China, Indonesia and Thailand, said this was for the first time a tree frog species, Rohanixalus vittatus (Striped Bubble-nest frog), was reported from the Andaman Islands of India.

The new genus Rohanixalus is named after the Sri Lankan taxonomist Rohan Pethiyagoda.

“Even though the amphibian fauna of Andamans has been frequently surveyed in recent years, family Rhacophoridae was so far not reported from these islands. Surprisingly, the Striped Bubble-nest frog is found to be common in wayside areas of North and Middle Andaman Islands,” according to the study published in the current issue of Zootaxa, an international journal of animal systematics.

The scientific article titled “New insights on the systematics and reproductive behaviour in tree frogs of the genus Feihyla”, with the description of a new related genus from Asia (Anura, Rhacophoridae) said new findings such as this frog indicate that the amphibian inventory of the region is still far from being complete.

In a statement, Biju said the discovery of a treefrog member from the Andaman Islands was unexpected and once again highlights the importance of dedicated faunal surveys and explorations for proper documentation of biodiversity in a megadiverse country like India.

“This finding also uncovers an interesting new distribution pattern of tree frogs that provides evidence for faunal exchange between the Andamans and the Indo-Burma region,” Biju said.

Researchers have said they studied multiple aspects, such as the external morphology of adults and tadpoles, phylogeny, calls, and breeding biology of several treefrog species widely distributed across South, Southeast, and East Asia and confirmed that they represent a new genus.

Frogs of this genus are known to inhabit forested as well as human-dominated landscapes right from Northeast India, Andaman Islands, Myanmar, Thailand, Malaysia, Indonesia, Vietnam, Laos, and Cambodia, up to southern China.

Rohanixalus is the 20th recognised genus of the family Rhacophoridae and currently comprises eight out of the 422 known Old World tree frog species found in Asia and Africa, they said.

Frogs of the new genus are characterised by a rather small and slender body (size about 2 to 3 cm long), a pair of contrastingly coloured lateral lines on either side of the body, minute brown speckles scattered throughout the upper body surfaces, light green coloured eggs laid in arboreal bubble-nests, and several unique behavioural traits including maternal egg attendance.

“Based on DNA studies, the new genus is also revealed to be a distinct evolutionary lineage from all previously known tree frog genera. During the breeding season, these tiny reddish-brown frogs can be found in large aggregations on bushes and shrubs (about 1 to 4 metres high) surrounding water bodies,” the statement said.

Scientists believe that many more unnamed Rohanixalus species are likely to be present and future dedicated efforts are required to fully understand the existing species diversity in this new genus.

According to the study, the female (mother) attends the egg clutches until hatching and assists in the release of the tadpoles into the water.

“During the first three days after egg laying the female sits over the eggs and produces a gelatinous secretion with which she glazes the egg mass through the clock-wise movement of her legs.

This behaviour provides necessary moisture to the eggs laid on exposed leaf surfaces and protects them from insect predation,” it said.

During field studies in Andamans, the researchers found a large number of egg clutches (over 50) of different developmental stages on a single leaf or plant. Multiple females usually attend such clutches in a behaviour termed as community egg attendance, they said.

Frogs of the new genus have a unique nesting behaviour and are reported to display territorial behaviour and frequent male-male combats involving pushing, kicking, and dislodging, in order to successfully mate with a female. PTI

J&K goes to polls first time after Article 370 abrogation. All you need to know

For the first time after the abrogation of Article 370 and the reorganisation of erstwhile state Jammu and Kashmir,...
Read more
National

He has been summoned in connection with suspected kickbacks in various infrastructure contracts. The CPI(M) is reportedly not averse to the Enforcement Directorate (ED)...
Read more
World

Yami Gautam burst on the Bollywood scene in 2012 with Shoojit Sircar’s Vicky Donor, in which she starred opposite Ayushmann Khurrana. She made a...
Read more