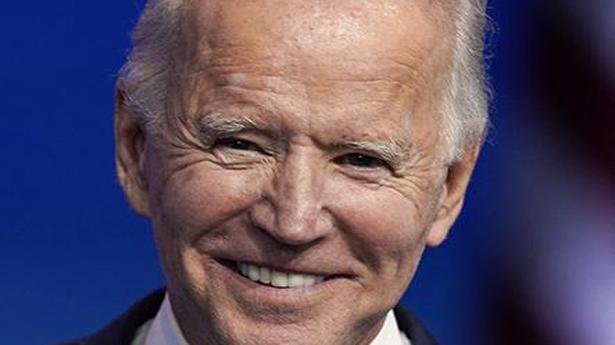 Leaders congratulated the Democrat without waiting for the official results.

Within days of U.S. media declaring Joseph Biden the President-elect, leaders of all South Asian countries, with the exception of Bhutan (which doesn’t have formal diplomatic ties with the U.S.), have congratulated him.

The fact that all leaders from Prime Minister Narendra Modi, Afghan President Ashraf Ghani and Pakistan PM Imran Khan, to Nepal’s PM KP Oli, Bangladesh’s Sheikh Hasina, Maldives President Ibrahim Solih and Sri Lanka President Gotabaya Rajapaksa tweeted to Mr. Biden without waiting for the official results, indicates that they each want to reach out to the Democratic administration early in the game, and expect to build on ties with the U.S. in continuation from the past.

PM Modi tweeted an old photograph of him and then-Vice President Biden and his government will count on that continuity for Indo-U.S. strategic ties, military exchanges and in building a counter to China in the Indo-Pacific region. This won’t just mean support in times of conflict, such as the current standoff at the Line of Actual Control (LAC), India will seek more support from the U.S. in presenting alternatives to the SAARC region.

Most countries in South Asia have higher bilateral trade figures with Beijing than with India or the U.S., and with the exception of India and Bhutan are all part of China’s Belt and Road Initiative (BRI). During the COVID-19 crisis as well, China has made several offers of medical aid, the promise of the vaccine and of debt waivers, and convened South Asian meets. India will also hope Mr. Biden continues Mr. Trump’s policy of pressure on Pakistan over terror, but there is a realistic assessment in New Delhi that Pakistan will have a close working relationship with the U.S. as U.S. troops pull out of Afghanistan, and Taliban cooperation is needed.

A closer analysis of the other SAARC countries shows that while they will welcome Mr. Biden’s more predictable style as well as his promised actions on issues like Climate Change, immigration, easing trade tariffs, immigration and visas, there will be differences on how they will perceive his policies on “strengthening democracies”, fighting terrorism and radicalism, concerns over human rights, and tackling the China challenge.

In her statement, Bangladesh PM Hasina said she hoped to cooperate with the U.S. in “effectively confronting the evils of terrorism, violent extremism, hatred, [and] forced displacements as of the Rohingyas,” indicating that she hoped Mr. Biden’s tenure would mark an exit from Mr. Trump’s travel ban and other policies that appeared to target Muslim countries.

In an article for Foreign Affairs magazine in April 2020, Mr. Biden spelt out his foreign policy priorities, which include plans for a global, annual ‘Summit for Democracy’ within his first year in office, where he marked three areas where he will demand commitments from all countries: “fighting corruption, defending against authoritarianism, and advancing human rights.”

Most South Asian countries that have been on the receiving end of U.S. pronouncements will watch his moves on human rights cautiously. Sri Lankan President Rajapaksa and his brother Prime Minister Mahinda Rajapaksa have faced U.S. government strictures over allegations of war crimes in the war against the LTTE for example, and will hope to turn the page now.

Watch | How is the President of United States elected?

Pakistan too will want to avoid a U.S. focus on minority rights, but will hope that Mr. Biden keeps the spotlight on the situation in Jammu-Kashmir and India.

“There is [a] legitimate concern that a Biden administration could mark a return of America’s liberal interventionist agenda focused on human rights, transitional justice and sanctions. Such moralist pressure could push countries like Sri Lanka, Nepal, Bangladesh and Myanmar further into Chinese hands,”explained Constantino Xavier of the Centre for Social and Economic Progress (formerly Brookings India). “Instead, Delhi’s expectation is that the U.S. under Biden would keep Trump’s primary focus on China as the greatest strategic challenge in South Asia.”

As a result, the entire region will probably be on tenterhooks until Mr. Biden clarifies his China policy. Continuing Mr. Trump’s confrontational policy with Beijing could cause trouble for those of India’s neighbours who have close ties with China, but not checking China’s aggressions will have a deep security impact in the region.

Mr. Biden himself has kept many guessing with his words in the April article, when he said, “the most effective way to meet [China’s] challenge is to build a united front of U.S. allies and partners to confront China’s abusive behaviours and human rights violations, even as we seek to cooperate with Beijing on issues where our interests converge, such as climate change, nonproliferation, and global health security”.

The BJP’s stakes are higher in the east; Congress’ leadership question has led to a piecemeal strategy  The announcement of the poll dates for the...
Read more

Diplomatic Affairs Editor Suhasini Haidar takes a look at the recent border developments between India and Pakistan. In this episode of Worldview, our Diplomatic Affairs...
Read more
Bharat News