Next round of commercial coal mine auction in Jan: Coal Minister Pralhad Joshi 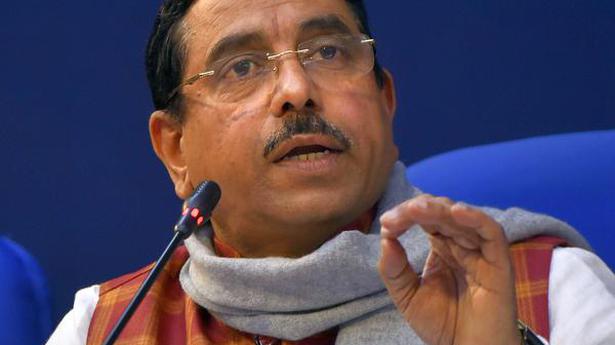 “I appeal to the state governments to cooperate [with the successful allottees of commercial coal mines auction], ”Says Mr. Joshi

Coal Minister Pralhad Joshi on November 12 said the center is planning to go for next round of auction of blocks in January and also appealed to the states to cooperate with commercial mine allottees to facilitate early operationalization of the blocks as it would create a positive atmosphere and boost confidence of investors.

The statement assumes significance as of the total 35 coal mines successfully auctioned in the last 10 tranches of auction, only 14 blocks could begin operations.

“I appeal to the state governments to cooperate [with the successful allottees of commercial coal mines auction], ”Mr. Joshi said in an interview to PTI.

He said, “Allow the 19 bidders which have been allotted blocks to operationalize the mines. Rest will also get confidence. So we will have to create such atmosphere. Cooperation means you [State] should get them [allottees] earlier clearances for the blocks… we want cooperation from state governments with regard to land acquisition, pollution control board. ”

The minister further said that before the sale of blocks began, the Jharkhand government was of the view that if the auction took place during COVID-19 times, not much revenue would be generated.

But in contrast, he said the Jharkhand government will be receiving the highest revenue among all states, of ₹ 2,690 crore per annum from the auctioned blocks.

“The revenue (from the auctioned blocks) will come after a year… People will think of 30 years and participate in the coal auction. And you should not speak like this but encourage others, ”Mr. Joshi said.

Jharkhand had earlier expressed apprehensions about subdued participation from bidders during the auctions.

The Minister also exuded confidence that in the next round of auctions there would be participation from global players.

The recent auction of coal mines for commercial mining witnessed “fierce competition” and the 19 blocks that went under the hammer can generate total revenues of around ₹ 7,000 crore per annum and create more than 69,000 jobs once they are operationalised, Mr. Joshi had said.

The auction of blocks for commercial mining has opened the coal sector to the private players.

The auction of these mines witnessed fierce competition and companies have offered great premiums, he said.

Out of 38 mines put on auction, 19 mines were successfully auctioned.

Mr. Joshi had said 42 companies participated in the auction, out of which 40 were private players.

Total 76 bids were received for 23 mines, wherein 19 mines had received two or more bids and were found eligible for opening of technical bids.

For three mines, there were single bids.

Some of the corporate biggies that have bagged blocks include Adani Enterprises, Vedanta, Hindalco Industries and Jindal Power.

Participants at talks in Geneva agreed on a mechanism for choosing the new government, whose formation has been the...
Read more
National

Agriculture Minister B.C. Patil to release it to the market tomorrow A cooperative society in Karkala in Udupi district has taken the lead to...
Read more
National

T.N. gets award for oil and gas conservation

The Hindu Explains | What has the RBI cautioned against in its latest Financial Stability Report?

The story so far: On Monday, the Reserve Bank of India (RBI) released the 22nd issue of its biannual financial stability report outlining the...
Read more

With markets on a roll, investors must exercise caution as the path to riches is riddled with potholes When we have success in our lives,...
Read more

‘Retail inventory has piled up’

Incentivise creation of jobs, MD of Clarks India urges govt. The domestic footwear industry was among the earliest to be impacted by the pandemic as...
Read more

Trump tells US depts to pare procurement from China

Bid to thwart attempts to infiltrate US IT networks. In another action against China days before he leaves office, US President Donald Trump...
Read more
Bharat News