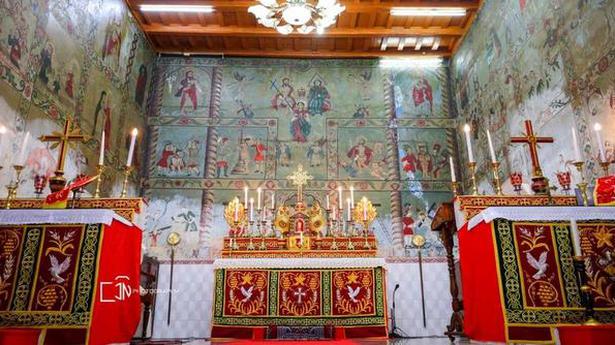 Protest is brewing against the move to demolish the St. George’s Orthodox Church, Cheppad, to enable widening of the National Highway (NH) 66. A relay hunger strike demanding the protection of the 800-year-old church completed 11 days on Thursday. Recently, the National Highways Authority of India (NHAI) had finalised a new alignment for the road development, which will flatten part of the church.

The church, known for its antiquity and the mural paintings on the walls of the apse (Madbaha), is estimated to have been built in the 12th century. Though it was rebuilt in 1952, the apse at the eastern end of the church was left intact to preserve the murals. “The authorities have laid stones marking the new alignment of the NH. Half the church building will have to be demolished and it will not be possible to retain the rest of the structure, including apse. The authorities fixed the initial alignment avoiding the church. But they changed it, we think, under pressure,” says Fr. Alexander Vattakkattu, vicar of the church.

Forty-seven murals are arranged in three rows on three walls of the church. The paintings include those of St. Paul with a sword, the birth of Jesus Christ, resurrection of Lazar by Christ, the kiss of Judas, the Last Supper, Christ bearing the cross and being flogged by soldiers, other scenes from crucifixion, Adam and Eve eating the forbidden fruit, and Noah’s Ark. These paintings, a blend of Persian art and Kerala’s mural artwork, have drawn enthusiasts from far and wide.

“According to a report of the Archaeological Survey of India, the murals are around 600 years old and were drawn using extracts from green leaves and fruits. In 1956, Ethiopian Emperor Haile Selassie visited the church and gifted many things including an Ethiopian Cross, a Holy Bible with gold engravings written in the Amharic language, and a statue of Virgin Mary, which are now preserved in the church museum. Efforts were on to enlist the church as a heritage monument under UNESCO when the parishioners received information that the church will have to be demolished for the widening of the NH,” says J. Philipose, a senior member of the church.

Parishioners say an earlier alignment of the road proposed to acquire land on the opposite side of the church. “Buildings on the opposite side are all less than 75 years old. Their owners exerted influence on the authorities to redraw the alignment. At a time when there is renewed awareness all over the world about preserving heritage structures, it is ironic that the ancient church has to face this ordeal,” Mr. Philipose says.

NHAI officials say that changes in alignment were made based on court order and after getting the nod from the State government. “Some people had lodged complaints against the initial alignment. The court directed to acquire land equally on both sides,” says, an NHAI official.