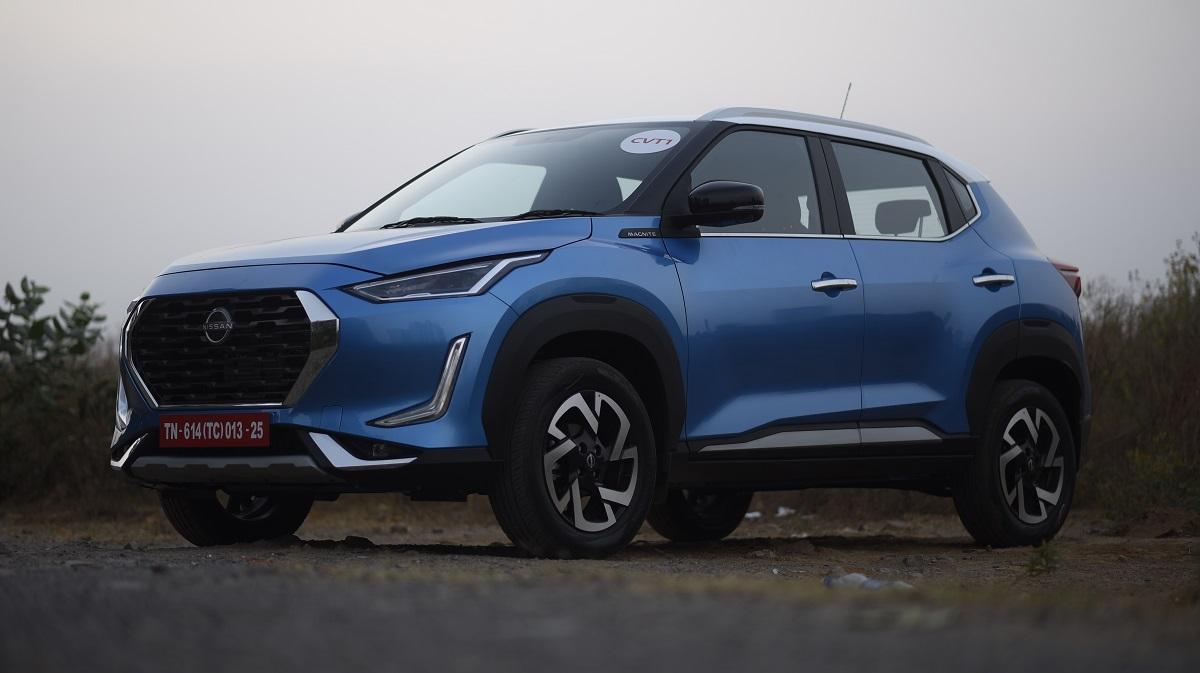 This Nissan Magnite review will tell you all you to need to know about what looks like the most promising entrant in the extremely competitive sub-four-meter SUV space in India. The official launch is on the 2nd of December; that is when we’ll get to know the Nissan Magnite price as well. Until then, here’s the review.

This section can actually be summarised in a line, which would be: the Nissan Magnite is the best looking vehicle in its segment, hands down. If you don’t agree, please check your medical records; you’ll notice that you’ve missed the follow-up with your ophthalmologist.

See, the Magnite has something, which its competitors lack—a beautiful rear.

In fact, irrespective of the segment, I don’t remember the last time I saw a well-formed behind of an automobile I was reviewing. Almost always it looks as if the design teams got the face of the vehicle right, but completed the rear in a jiffy to make the deadline.

Nissan took its time with the Magnite, and it shows. There’s nothing on it that seems like an afterthought, or a last-minute nip-and-tuck. They even got the size and shape of the fonts right; something, which more than a few manufacturers seem to be struggling with.

Nissan has aced it here and they get a 10/10 from me for the design of the Magnite.

Before you enter the Magnite, I would recommend that you carry six, one-liter, water bottles; four to five packets of chips, and more than a couple of phones. Because that’s how you would truly appreciate the cabin of the Magnite. It would swallow all of that and still look at you with an expression on the lines of, “that’s it?”

Nissan has clearly chosen “function” over “flash”. Therefore, while the overall cabin ambience in the first five minutes won’t feel as “rich” as most of its competitors’, it will definitely feel more thoughtful and accommodating over time.

In fact, even within those first few minutes, you’ll easily find that there’s a lot more to love about the Magnite’s cabin than there is to loath. For example, I absolutely love the fact that everything is angled towards the driver, and that start/stop button placement is the best yet as well. Pressing it brings to light the most colourful instrument cluster in the segment that starts with a Magnite coming enthusiastically to greet you, which then makes a 180-degree turn to face the direction your actual Magnite is facing. Does bring a smile to your face everytime. You would also like the Lambo-inspired AC vents, and you won’t ever get tired of looking at those absolutely gorgeous three AC rotary dials that have their respective functions displayed within them—classy and beautiful.

Anyone who likes attention to detail must check out the fabric on the doors, which, Nissan told me, is standard even on the base variant. What’s also standard is the absolute adamant armrest between the front seats. Adamant, because it neither slides forward nor opens up. Still, as mentioned earlier, there’s tons of storage space anyway in this cabin, so a non-revealing front armrest can be forgiven.

Speaking of storage space, the Magnite’s glovebox is the biggest of them all. You would also like how the switchgear feels. All controls—stalks, buttons, and switches—have a certain amount of weight, and do not feel flimsy.

The seats are fantastic too—can easily accomodate six-foot-tall individuals as well. Also, kneeroom at the rear seems to be the best in the segment, which could very well be the deciding factor for many prospective buyers. My tall friend didn’t find any issue with the headroom, and he was quite content with the recline angle of the seatback, and with the under-thigh support as well. The crux is: this Nissan would be the first choice in this segment for families with taller members.

Let me give you the power and torque figures first:

Did you notice the better torque output of the manual? Nissan claims that the manual can achieve a 0–100 kph time of 11.7 seconds. My best was 11.9 seconds. I am certain that I would have bettered it if I had more time on hand, but I was happy with a sub-12-second run.

The CVT turned out to be a pleasant surprise. My best run in “normal” mode was 11.6 seconds. The shocker was the run in “Sport” mode. Ladies and gentlemen, the Magnite CVT dismissed the 0–100 kph run in Sport mode in just 10.8 seconds! That is QUICKER than the quickest Sonet (the 120 PS Diesel AT), which had accomplished the same sprint in 11.2 seconds. Do you even now care to know about how it performs in the roll-ons, fuel efficiency, etc.?

Well, even if you don’t, I shall still tell you. In normal mode, the CVT goes from 60 to 80 kph in a shade under four seconds. In Sport mode, it suddenly remembers that its elder sister is a GT-R; hence, it quickly shaves off nearly a second from its usual 60 to 80 kph time. I couldn’t do the roll-ons in the manual, which I think would be around the CVT or, maybe, a bit quicker because you always have the liberty of choosing the gear YOU want in a manual. That said, the Magnite CVT is the quicker car in most situations.

The manual will be more fuel-efficient though. The company is claiming a fuel efficiency figure of 20 kmpl for the manual, and 17.7 kmpl for the CVT. For the naturally aspirated engine, it’s 18.75 kmpl. From what I noticed during my drive, you may expect 14-15 kmpl from the CVT in the city, and over 17 kmpl on the highways. The manual should return over 15 kmpl in city traffic, and close to 20 kmpl (maybe even more, if driven with a light foot) on the highways. The naturally aspirated engine’s real-world fuel efficiency will be discussed as and when I get my hands on it.

As far as ride and handling “combination” or “balance” is concerned, the Magnite would be in the top three among the seven odd SUVs that play in this segment. The steering is light enough at city speeds, which the masses would love, and there’s just the right amount of weight at high speeds to keep the enthusiast involved. The best part is that despite boasting 205 mm of ground clearance, the bodyroll is beautifully contained. In fact, it’s even better than the 2020 Hyundai i20 I tested a few days ago!

Nissan’s ride quality is quite reassuring; in fact, this is one area where it might come in the top two when assessed back to back with its competitors. It just doesn’t lose its composure, no matter what you throw at it. The elderly in your family are going to love this vehicle.

I managed to squeeze in an 80 to 0 kph braking test as well. In fact, before I could stand on the brake pedal, the speedo was showing 87 kph. The Magnite came to a complete standstill in a shade under four seconds, without deviating from its trajectory. The distance and time would reduce further with grippier rubber. As of now, the ABS kicks in earlier than you’d expect—a sign that the tyres are overwhelmed.

Before I give you the verdict, I’ll share a few more details that I missed above. The boot space is 336 liters, which is par for the course. There’s no sunroof on offer yet, which is India’s most loved feature in automobiles. But there’s a first-in-segment 360-degree camera, which is a lot more accurate than your kids hanging out from the sunroof and assisting you with parallel parking.

There’s a dead pedal too, in the CVT of course, which sometimes even much costlier cars don’t provide.

Then there are LED headlamps, LED DRLs, and LED fog lamps. I consider myself lucky enough that I got to drive the Magnite even after dark, which allowed me to check its headlight efficiency as well. I am happy to report that you would like the throw, spread, and brightness of the Magnite’s headlamps.

There’s wireless charging, wireless Apple CarPlay and Android Auto, touchscreen infotainment, ambient lighting, and a few other features that you may check-in their brochure.

If you’ve read every line of the review above, you would already know the verdict. However, if you haven’t, or if you’re suffering from amnesia, I shall summarise it up for you.

The Nissan Magnite comes across as the most sensible vehicle in its segment. It does everything well, and a few things a lot better than its competitors. I won’t refrain from using a cliche here—it punches way above its weight. If priced well (Nissan has to, at least initially), this would be the first choice for most in this segment.