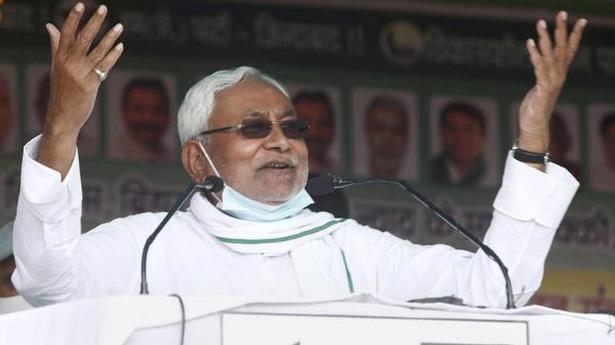 His two deputies in the Cabinet, Tarkishore Prasad and Renu Devi, were given charge of Departments such as Finance, Forest & Environment, Backward Caste and EBC welfare along with Industry and Panchayati Raj.

A day after taking oath as Bihar Chief Minister, Nitish Kumar on Tuesday allocated portfolios among the 14 Ministers, while keeping Home and General administration to himself. His two deputies in the Cabinet, Tarkishore Prasad and Renu Devi, were given charge of departments such as Finance, Forest & Environment, Backward Caste and EBC welfare along with Industry and Panchayati Raj.

However, a controversial induction into the Cabinet was that of two-time JD(U) MLA from Tarapur in Munger district Mewalal Choudhury. In 2017, he was accused in a recruitment scam of assistant professors and junior scientists. Mr. Choudhury, who has been given charge of Education, was the Vice Chancellor of the Sabour Agriculture University from 2010-15. An FIR was lodged against him by the Special Vigilance department at the Sabour Police Station in Bhagalpur under sections 409, 420, 467, 468, 471 and 120(B) of the IPC in connection with the university scam in 2012-13. He was later suspended from the party.

Mr. Choudhury on Tuesday, however, refused to make any comment on the charges against him.

The Rashtriya Janata Dal (RJD) took a dig at Mr. Kumar for giving Education to Mr Choudhary. “The corrupt JD(U) MLA whom Sushil Modi was once looking for has been made minister by patron of corruption Nitish Kumar. This is the double character of Nitish Kumar who has been patron of 60 scams. This man (Mr Kumar) can stoop to any low for chair (of CM)”, it tweeted.

JD(U) leader and former Assembly Speaker Vijay Choudhury was given charge of Rural Development Water Resources, Rural Engineering, Information & Broadcasting and Parliamentary Affairs departments, while former Energy and Prohibition minister Bijendra Yadav has been allocated the same departments along with Planning and Food and Consumer Affairs. Former Building Construction Minister and a close confidant of Chief Minister Kumar, Ashok Choudhury has been repeated as Minister for Buildings, Minorities and Science &Technology.

Former Health Minister Mangal Pandey was given charge of the same department again, along with Road, Art & Culture. Senior BJP leader and party MLA from Ara for several times Amrendra Pratap Singh was allocated Agriculture, Cooperative and Sugar Cane, while Ram Preet Paswan was given charge of PHED (Public Health Engineering Department) and Jivesh Kumar Mishra, BJP MLA from Jale in Darbhanga district, got Tourism, Labour and Mines. Another BJP MLA Ram Surat Rai was given charge of Revenue and Law departments.

India began commercial exports and sent two million doses of Covishield, developed by AstraZeneca and the University of Oxford, to Brazil on January 22. ...
Read more

Thackeray founded the Shiv Sena, a party wedded to the “Marathi manoos” cause, and later, to Hindu nationalism. Paying tributes to Shiv Sena founder...
Read more

Four persons suffered burns after the boat, in which they were preparing to venture into sea for fishing, caught fire reportedly owing to short...
Read more
Bharat News