In-laws cannot be left out in bride suicide cases: HC

Some Delhi hospitals left with just a few hours of oxygen: Kejriwal 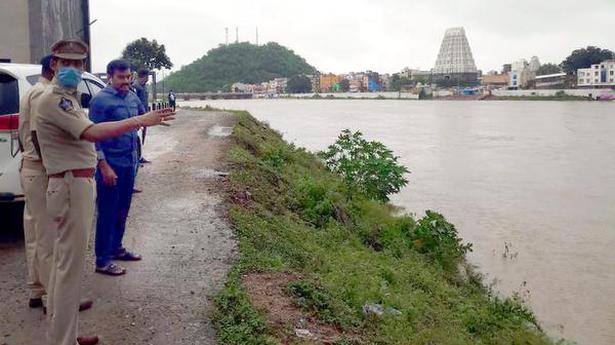 Cyclone Nivar stopped short of leaving a trail of destruction across Chittoor district, caused by the high-velocity gales and heavy downpour for the last 48 hours. Apart from land slides, several instances of uprooted electric poles and trees were reported on Thursday.

The district witnessed an average of 8.6 cm rainfall, while the mandals close to Tamil Nadu such as KVB Puram, Srikalahasti, Varadaiahpalem, Nagalapuram and Sri Rangaraja Puram registered over 12 cm. Many rivers and streams are in spate across the district. In Srikalahasti town, the roads leading to Varadaiahpalem and KVB Puram were closed down for traffic and efforts were on to identify alternative routes.

A whopping 25,000 cusecs of water was released from the Mallemadugu reservoir in Renigunta mandal to ease the pressure on the structure. As a result, three farmers got stuck in the swirling waters of Rallavagu, but they could not be evacuated immediately due to the hostile conditions, in spite of the rescue team’s preparedness.

A command control centre has been set up at the Collectorate to closely monitor the situation. Collector Bharat Narayana Gupta has appealed to residents to stay put in their houses till Friday. He also advised them against moving closer to water bodies or bridges as water reached the danger mark. Much against expectations, the cyclone’s impact was also felt in the central and western mandals of Chittoor, Pakala, Punganur and Somala.

The major irrigation sources in the district are up to the brim. The Araniar project, built over Aruna river in Pichatur mandal, has 1.643 TMC of water against its storage capacity of 1.853. Water was flowing in at the rate of 3,350 cusecs and out through the spillway at 1,750 cusecs at 6 a.m. on Thursday. Similarly, the Kalangi reservoir contained 194.90 mcft against its full capacity of 241. Water level was steadily rising in the Krishnapuram project and was found to be 166.62 mcft against its holding capacity of 199.27 mcft on Thursday morning.

Superintendent of Police (Chittoor) S. Senthil Kumar rushed to Sri Rangaraja Puram where the road leading to Pathapalem was cut off due to the gushing waters of the local stream, affecting eight villages. He directed the personnel to take precautionary measures in areas prone to submergence.

Meanwhile, Superintendent of Police (Tirupati Urban) Avula Ramesh Reddy toured sensitive areas where alerts have been sounded in the wake of incessant rains. He alerted the line departments to get the residents of the low-lying areas along the Swarnamukhi river shifted out of 77 risk-prone areas.

A Nivar rescue team is readily available at the district police headquarters in Tirupati, exhibiting full preparedness to meet any exigencies.

With an uncontrollable surge of coronavirus cases in India, Prime Minister Narendra Modi has cancelled his travel to Europe...
Read more
Entertainment

The Telangana government on Tuesday issued a new directive to theatre owners as the night curfew to contain the spread of coronavirus comes into...
Read more
National

The Travancore Devaswom Board (TDB) has decided to allow only 10 devotees at a time for darshan and to restrict those below 10...
Read more
Business

<!-- -->Industry should have faith and feel that the government is accessible: Finance MinisterFinance Minister Nirmala Sitharaman on Tuesday said there should be complete...
Read more
National

Despite COVID-19 infections rising sharply and a large number of consequential deaths in different districts, the consolidated information disseminated by the Odisha government has...
Read more

With an uncontrollable surge of coronavirus cases in India, Prime Minister Narendra Modi has cancelled his travel to Europe next month, the Ministry of...
Read more

The Travancore Devaswom Board (TDB) has decided to allow only 10 devotees at a time for darshan and to restrict those below 10...
Read more

Despite COVID-19 infections rising sharply and a large number of consequential deaths in different districts, the consolidated information disseminated by the Odisha government has...
Read more

Taking exception to the apathy of the State government towards the indefinite strike of transport employees seeking fulfilment of their rightful demands, several employees...
Read more
Bharat News