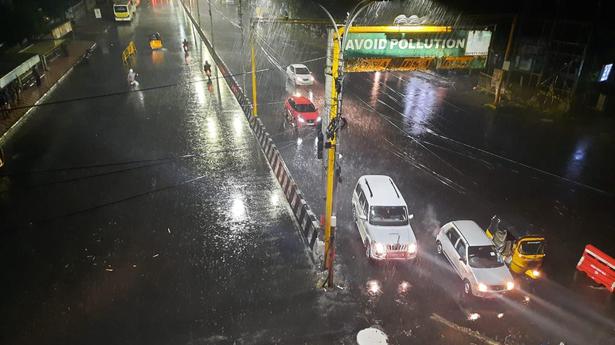 In the process of landfall, it dumped extremely heavy rainfall in coastal areas. Puducherry received the highest of 30 cm rains followed by Cuddalore 27 cm and Chidambaram 13 cm. Rains lashed many places in and around Chennai too. While Nungambakkam recorded 11 cm, Poonamallee and Taramani received 10 cm till 6.30 a.m. on Thursday.

The severe cyclonic storm Nivar now lay centered over north coastal Tamil Nadu, about 50 km northnorthwest of Puducherry. It still maintains a wind speed of 85 to 95 kmph as it moves to interior areas. It would move northwest wards and weaken further into a cyclonic storm during next three hours.

Places like Ambur, Tiruvannamalai, Vellore and Arani may experience squally winds with a speed of 50 kmph. In Chennai, rains may continue and winds will be strong for next six hours, according to the Meteorological Department.

Meanwhile, Kancheepuram collector Mageswari Ravikumar has announced that the water release from Chembarambakkam reservoir has been reduced considerably to 1,500 cusecs around 7.30 a.m. on Thursday as rains have receded. The sluices gates of RedHills reservoir may not be opened on Thursday as it may take another two days to reach the maximum water level, noted officials of Water Resources Department.

A medical team from the Directorate General Armed Forces Medical Services (AFMS) has arrived in Delhi and will look after the facility A 500...
Read more

Voting will be held from 7 a.m. to 6 p.m. with over 3.23 crore voters eligible to exercise their franchise Voting for the second...
Read more
Bharat News