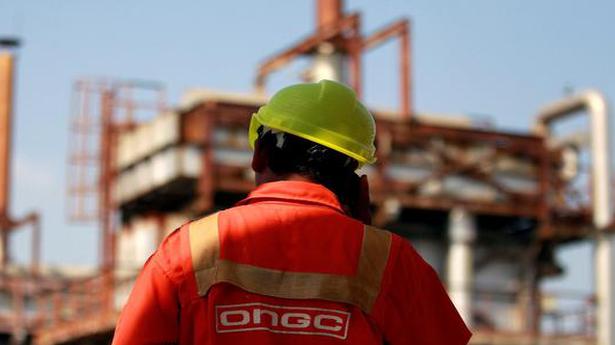 ONGC on Tuesday said capital was potentially during the current fiscal is likely to be close to the ₹ 32,500-crore target as it is redoubling efforts to make up for the time lost due to the pandemic.

Oil and gas exploration and production projects are highly dependent on foreign vendors for the supply of equipment and services. Also, facilities like rigs are operated by foreign crews.

However, with the gradual resumption of economic activity globally, ONGC is hopeful of making up for the lost time, Mr. Kumar said.

ONGC has taken up project work on a war footing to meet the capex target.

The government is looking at increased public spending to give a boost to the pandemic-hit economy. It is pushing public sector companies to not just meet the stated capital preliminary targets but even go beyond them.

On the capex for the next fiscal, he said ONGC was in the process of recasting the numbers.

Stating that the company continues to lose money at the current government-mandated gas price of $ 1.79 per million British thermal unit, he said the company starts making money only if gas prices are above $ 3.7.

The government, he said, has set up a committee to look into the demand for reviewing the current formula which has made gas production an unviable proposition.

ONGC, however, is not in favor of either floor or cap on gas prices and there is a need for a balance between both.

“We have now rock bottom prices,” he said.

On the outlook for coming quarters, Mr. Kumar said “the worst is behind and things will improve”.

“Things can only get better from here. We anticipate second-half performance will be better, ”he said.

“We assume oil prices to average $ 45 per barrel in 2021 because of low demand and high inventory levels. As such, earnings from sale of crude oil will remain at or near current levels over this period, ”it said.

Earnings from gas sales will decline because the Government of India reduced domestic natural gas prices by 25% from October 2020, it said adding lower gas revenue will not have a significant impact on overall revenue as gas contributes only about 20-25% of upstream revenue .

Earnings from the refining segment will recover in subsequent quarters on the back of a recovery in throughput levels. However, it will remain weak compared with previous years because of sustained weakness in refining margins, it said.

“We expect capital spending to increase in the subsequent quarters as economic activity rebounds following the easing of lockdowns,” Moody’s said.

In addition, shareholder payments are expected to remain in line with historical levels notwithstanding the company’s operating performance as the government, which is the largest shareholder in ONGC, relies on dividends from the company as a source of revenue to meet its fiscal deficit target.

However, the company has not declared any dividend in the current fiscal year.

“An increase in capital spending and shareholder payments during the current low earnings period could translate into an increase in borrowings creating pressure on the rating,” Moody’s said.

A constable and a home guard from Puttur Rural police station helped a worker from Madikeri reach his hometown...
Read more
National

Chief Minister B.S. Yediyurappa on Tuesday announced that there is no shortage of vaccines since they have been arriving in the State.“There is neither...
Read more
National

Amid a string of key political meetings and a petition being signed by a group of BJP MLAs against Chief Minister B.S. Yediyurappa,...
Read more
National

EDLI provides relief to families of EPFO ​​members during pandemic

The scheme's purpose is to ensure that the family gets financial assistance in case of the member's death. ...
Read more

EDLI provides relief to families of EPFO ​​members during pandemic

The scheme's purpose is to ensure that the family gets financial assistance in case of the member's death. ...
Read more

If you're planning to buy a car in 2021, We have selected the top choices in three price ranges: below Rs 7 lakh, between...
Read more

A term plan is a life insurance policy that pays the beneficiary the sum assured upon the demise of the insured person. The policy holder...
Read more