Pakistan media mogul gets bail after months in prison 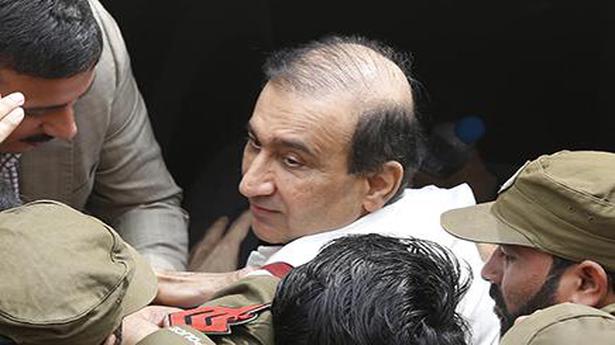 He has frequently been critical of Imran Khan’s govt., Army.

Pakistan’s top court on Monday granted bail to the owner of one of the country’s largest media groups, after a months-long detention condemned by rights groups as suppression of the press.

Mir Shakeel-ur-Rehman’s Jang Group, which includes some of Pakistan’s biggest newspapers and the Geo television network, has frequently been critical of Prime Minister Imran Khan’s government as well as the country’s powerful military.

He was arrested in March over alleged corruption in a land transaction dating back to 1986, an accusation denied by his representatives who, in turn, alleged that Pakistan’s corruption watchdog targeted him because Mr. Rehman’s media group looked into the agency’s workings.

“The court has granted bail to Mir Shakeel-ur-Rehman, he is going to be released after spending more than 200 days in detention”, Rana Jawad, Geo TV’s director of news, told AFP.

Last week, Reporters Without Borders (RSF) called on Pakistan’s supreme court to order Mr. Rehman’s release, saying he was being held on a “spurious charge”. RSF added Mr. Rehman’s group was targeted because its journalists “dare to tackle stories that are supposed to be off-limits”.

Pakistan routinely ranks among the world’s most dangerous countries for media workers and criticism of the country’s powerful security establishment has long been seen as a red line.

Journalists and bloggers have complained of intimidation tactics, including kidnappings, beatings, and even killings if they cross that line. Last month, a Geo journalist briefly went missing after reporting on the controversial arrest of an opposition politician.

The Central government is all set to accelerate the first phase of COVID-19 vaccination drive by roping in additional...
Read more
National

The Kapil Sharma Show is set to go off air temporarily. The comedy show on Sony TV will undergo a few creative changes and...
Read more
World

‘Do not travel to India-Pak border’: U.S. updates travel advisory to...

It was the second night of unrest in towns and cities across the Netherlands that initially grew out of calls to protest against the...
Read more

The young climate activists reminds the world of the promises made to the younger generation. Climate and environmental activist Greta Thunberg on Monday asked the...
Read more
Bharat News