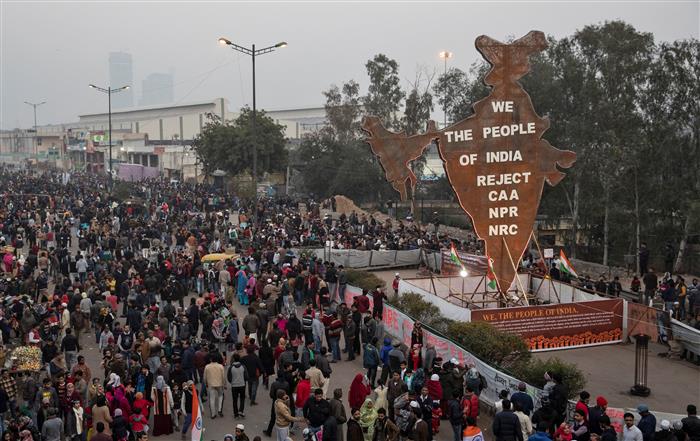 More than two months after the Supreme Court ruled that roads and public spaces can’t be blocked indefinitely and demonstrations had to be in designated places alone, a petition has been filed seeking review of the verdict.

“Such observations may prove to be a license in the hands of the Police to commit atrocities on legitimate voice of protest, especially the protesters coming from the vulnerable sections of the social strata. Again this aspect is an error of law apparent,” the review petition filed by a group of 12 Shaheen Bagh protesters stated.

They said the October 7 judgment “appear to be giving way to an unrestricted sanction to the police to take action by misusing these observations.”

Maintaining that “democracy and dissent go hand in hand”, the Supreme Court had ruled that roads and public spaces cannot be blocked indefinitely and demonstrations expressing dissent have to be in designated places alone.

Deciding petitions seeking removal of protesters against the Citizenship Amendment Act (CAA) from Shaheen Bagh in Delhi, a three-judge Bench headed by Justice SK Kaul had said, “We have…no hesitation in concluding that such kind of occupation of public ways, whether at the site in question or anywhere else for protests is not acceptable and the administration ought to take action to keep the areas clear of encroachments or obstructions”.

Notified on January 10, the CAA relaxed norms for grant of Indian citizenship by naturalization to Hindu, Sikh, Christian, Buddhist and Jain and Parsi victims of religious persecution from Pakistan, Afghanistan and Bangladesh who came to India before December 31, 2014. The top court had on January 22 refused to stay the operation of CAA and NPR.

Though the protesters blocking the Kalindi Kunj-Shaheen Bagh stretch, including the Okhla underpass since December 15, 2019, were removed on March 24 this year after COVID-19 lockdown was enforced, the top court had chosen to keep the matter pending to clarify the legal position on the issue.

The court had also faulted the authorities for not taking any decision, saying: “Unfortunately, despite a lapse of a considerable period of time, there was neither any negotiations nor any action by the administration, thus warranting our intervention”.

It says those who mistreat animals must be dealt with as mercilessly as they deal with animals The Madras...
Read more
National

24-hour strike began at midnight on Feb. 22, services to be restored today The Kerala State Road Transport Corporation schedules, 93% of them, did not...
Read more
National

The agency will undertake infrastructure and land pooling works in Amaravati region In an attempt to give impetus to the works undertaken in the capital...
Read more
Featured

Days after the J&K administration disallowed women from the PoK to meet visiting foreign envoys, they held a protest march in Srinagar on Tuesday...
Read more