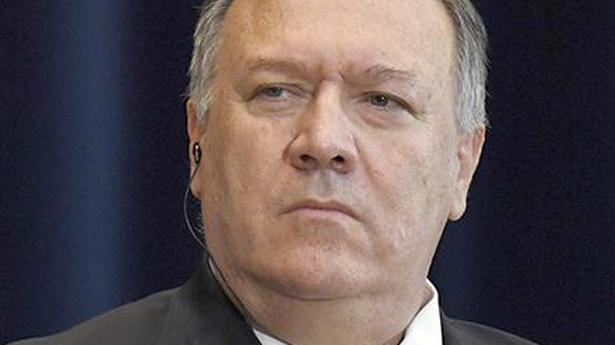 U.S. Secretary of State Mike Pompeo met negotiators from the Afghan government and the Taliban in Doha on Saturday, amid signs of progress in their talks as Washington speeds up its withdrawal.

Mr. Pompeo’s visit comes in the wake of a rocket attack which struck densely populated areas of Kabul, killing at least eight people in the latest outbreak of violence in the Afghan capital.

The Taliban denied responsibility and the Islamic State group claimed the deadly strike.

Mr. Pompeo met separately with the Afghan government and Taliban negotiation teams in a luxury hotel in the Qatari capital.

“I would be most interested in getting your thoughts on how we can increase the probability of a successful outcome”, Mr. Pompeo said as he met the Afghan government side, noting the shared interest in such a scenario.

He also met Qatar’s ruler, Emir Sheikh Tamim bin Hamad Al-Thani, and Mohammed bin Abdulrahman Al-Thani, the foreign minister, on his stop in Doha, which is the Taliban’s base for diplomacy.

The outgoing top U.S. diplomat is on a seven-nation tour of Europe and the Middle East, as President Donald Trump shores up late-term priorities.

Earlier this week, the Pentagon said it would soon pull some 2,000 troops out of Afghanistan, speeding up the timeline established in a February deal between the U.S. and the Taliban.

After the Centre decided to allow vaccinations for everyone above 18 from May 1, Opposition leaders on Monday sought to claim credit for making...
Read more
National

The Centre is set to accept the Serum Institute of India’s (SII) request for a ₹30 billion ($400 million) grant to boost its capacity...
Read more
World

Activists for imprisoned Russian opposition leader Alexei Navalny on Sunday called for massive protests in the heart of Moscow and St. Petersburg as Mr....
Read more

During NASA's own coverage of the event livestreamed from JPL headquarters, NASA also displayed the first images from the flight. (Subscribe to Science For All,...
Read more
Bharat News