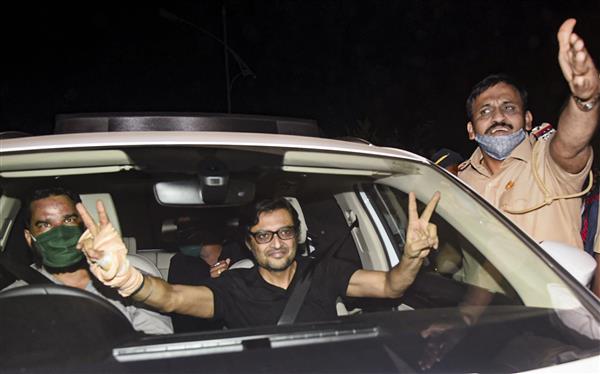 Journalist Arnab Goswami on Thursday withdrew his bail plea filed before the sessions court at Alibaug in Raigad district in connection with an abetment to suicide case of an interior designer.

The Republic TV Editor-in-Chief, arrested on November 4, was on Wednesday granted interim bail in the 2018 case by the Supreme Court. Hours later, he was released from Taloja prison, where he was lodged under judicial custody.

Two other accused in the case were also granted interim bail by the Apex Court.

The 47-year-old news anchor had on Monday filed a regular bail plea before the sessions court in Alibaug, around 90km from Mumbai where the abetment of suicide case has been registered.

However, on Monday, after the Bombay High Court refused to grant him interim bail, Goswami approached the Apex Court for relief on Tuesday.

We have withdrawn the bail plea filed in the sessions court, Goswami’s lawyer Gaurav Parkar said.

Meanwhile, Additional Sessions Judge RG Maleshetti on Thursday adjourned till November 23 order on the revision application filed by the Alibaug police challenging a November 4 local magistrate’s order refusing police custody of Goswami and the other accused, and sending them to judicial remand.

The sessions court will on November 23 also hear the regular bail pleas filed by the two other accused Feroze Shaikh and Nitish Sarda.

Lawyers of the accused persons told the sessions court that since the trio had already been granted interim bail, the revision application had become infructuous.

The prosecution, however, argued the court could still pass its order on the revision application.

The police, in their application, had sought the sessions court to remand the three accused to police custody for interrogation.

The 2018 case relates to suicide by interior designer Anvay Naik and his mother Kumodini, residents of Alibaug, over alleged non-payment of dues by companies of the accused persons. PTI