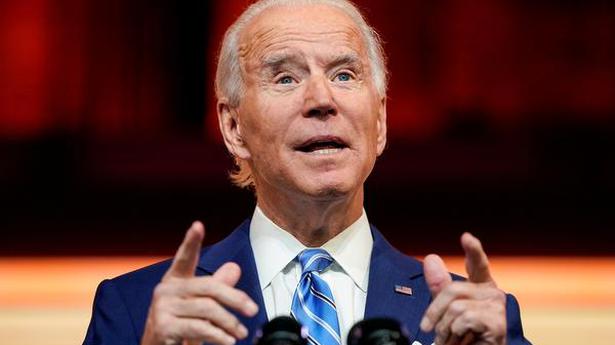 Called the “American Rescue Plan,” the legislative proposal would meet Joe Biden’s goal of administering 100 million vaccines by the 100th day of his administration

President-elect Joe Biden is unveiling a $1.9 trillion coronavirus plan to turn the tide on the pandemic, speeding up the vaccine roll-out and providing financial help to individuals, states and local governments and businesses struggling with the prolonged economic fallout.

Called the “American Rescue Plan,” the legislative proposal would meet Mr. Biden’s goal of administering 100 million vaccines by the 100th day of his administration, while advancing his objective of reopening most schools by the spring.

On a parallel track, it would deliver another round of aid to stabilise the economy while the public health effort seeks the upper hand on the pandemic, said aides who described the plan ahead of a speech by Mr. Biden on January 14 evening.

The plan would also extend a temporary boost in unemployment benefits and a moratorium on evictions and foreclosures through September. And it shoehorns in the long-term Democratic policy aim of increasing the minimum wage to $15 an hour and expanding paid leave for workers across the economy.

Senate Democratic leader Chuck Schumer of New York has said Mr. Biden’s proposal will be his first order of business this year. The emergency legislation would be paid for with borrowed money, adding to trillions in debt the government has already incurred to confront the pandemic.

Aides said Mr. Biden will make the case that the additional spending and borrowing is necessary to prevent the economy from sliding into an even deeper hole. Interest rates are low, making debt more manageable. The aides spoke on condition of anonymity to describe the plan ahead of his speech on January 14 night.

Mr. Biden has long held that economic recovery is inextricably linked with controlling the coronavirus. “Our work begins with getting COVID under control,” he declared in his victory speech. “We cannot repair the economy, restore our vitality or relish life’s most precious moments until we get it under control.” The plan comes as a divided nation is in the grip of the pandemic’s most dangerous wave yet. So far, more than 385,000 people have died of COVID-19 in the U.S. And government numbers out on January 14 reported a jump in weekly unemployment claims, to 965,000, a sign that rising infections are forcing businesses to cut back and lay off workers.

Next Wednesday, when Mr. Biden will be sworn in as President, marks the anniversary of the first confirmed case of COVID-19 in the United States.

In a munificent donation Chairman of the Pasco group Sanjay Passi and his wife Shalini Passi on Friday contributed...
Read more
National

The Mekong River delta, known as the ‘rice bowl’ of Vietnam, is home to beautiful flower villages. These are prime tourist destinations in the...
Read more

Ahead of the release of the declassified U.S. intelligence report, U.S. President Joe Biden spoke to Saudi King Salman for the first time since...
Read more
Bharat News