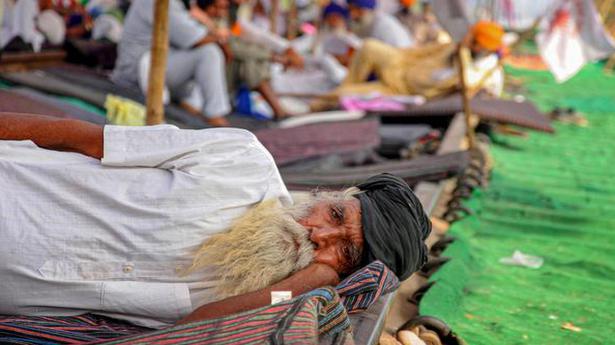 Goods trains have not entered Punjab for one and a half months now, except for two days in late October, leading to a shortage of essential goods

Talks between Central Ministers and protesting Punjab farmer unions ended inconclusively on Friday after a meeting that lasted over six hours. There was no promise from the Centre on resumption of goods train services in the State.

One month ago, the unions walked out of talks with the Centre. Goods trains in the State were stopped after rail roko protests against three controversial Central agricultural reform laws erupted.

Goods trains have not entered Punjab for one and a half months now, except for two days in late October, leading to a shortage of essential goods, including fertilizers needed for wheat sowing and coal supplies for thermal plants. Farmers say that since they have ended the rail roko, train services should resume, and accused the Centre of blackmailing an entire State. The Railways say that passenger trains must also be allowed, and all stations cleared of protesters.

In talks last month, Punjab farmer leaders were angry at being fobbed off with a meeting with the Agriculture Secretary and instead demanded to meet with a group of ministers empowered to negotiate their demand to repeal the laws passed by Parliament last month. They are currently meeting with a three-member ministerial team, including Agriculture Minister Narendra Singh Tomar, Railway Minister Piyush Goyal and Minister of State for Commerce Som Parkash. Railway Board chairman Vinod Kumar Yadav also addressed the meeting.

The farmers’ delegation is led by Krantikari Kisan Union president Darshan Pal and Bharatiya Kisan Union-Ekta president Balbir Singh Rajewal, and represents 30 farmers groups which have been jointly leading protests against the farm laws. They say the new laws will dilute the regime of government procurement at minimum support prices, benefit corporates more than small farmers, and lead to the demise of State-run mandis or markets. They are also protesting the Electricity Bill, 2020, which could end power subsidies for farmers.

If their demands are not met with, farmer unions have vowed to observe a black Diwali day in the State on Saturday. They have also announced a ‘Dilli chalo’ protest on November 26 and 27, with thousands of farmers from Punjab, Haryana and western Uttar Pradesh expected to arrive in the capital with tractors for an agitation.