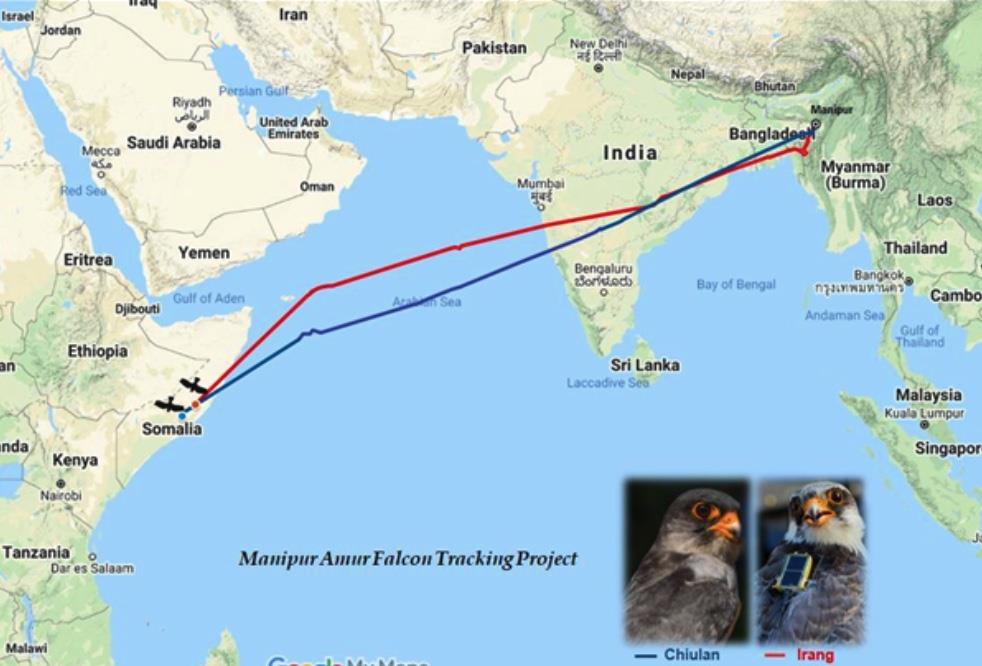 Imagine travelling over 5,000 km non-stop without using any transport and crossing a sea en route!

Chiulon and Irang, two Amur Falcons radio-tagged in Manipur, have been found to have flown more than 5,000 km at a stretch to reach the deserts of Somalia from the rainforests of the north-eastern state.

After spending close to 20 days in Manipur and adjoining areas the two satellite-tagged Amur Falcons: Chiulon and Irang set out on their second-year migration on 11 and 12 Nov. They have now arrived in Somalia covering 5700 km and 5400 km in five and half days nonstop flight. pic.twitter.com/HxMy6JqnNz

The birds had returned to Manipur last month after covering over 29,000 km which formed their annual migratory circuit.

On October 31 and November 1, 2019, five Amur falcons — three named after Manipur villages (Puching, Chiulon and Phalong) and two after Manipur rivers (Irang and Barak) — were radio-tagged at Tamenlong in Manipur as part of a joint endeavour between Manipur Forest Department and Wildlife In, Dehradun.

Irang reached Chandel, about 200km from Tamenglong, on October 25, 2020. Chiulon reached Tamenglong three days later. An elated Ministry of Environment, Forest and Climate Change (MoEF&CC) announced the arrival of the birds in a tweet.

“A milestone has been achieved in the conservation efforts of birds, as an Amur named Irang, tagged in Manipur has returned to the state after completing its migratory route full circle & covering 29,000km. Another Amur named Chiulon also arrived in the state yesterday,” stated the MoEF&CC tweet.

Radio contact could not be established with the three remaining falcons (Puching, Phalong and Barak) fitted with a satellite device. “Barak was last located on the Meghalaya-Bangladesh border. Then we lost contact”, Dr R Suresh Kumar, a scientist with the Endangered Species Management Department of Wildlife Institute of India, Dehradun, told the Tribune.

It turned out that three weeks was enough rest for the two falcons who could be tracked by researchers.

“After spending close to 20 days in Manipur and adjoining areas the two satellite-tagged Amur Falcons – Chiulon and Irang – set out on their second-year migration on 11 and 12 Nov. They have now arrived in Somalia covering 5700 km and 5400 km in five and half days nonstop flight”, Prakash Javadekar, Minister of Environment, Forest & Climate Change, tweeted on Wednesday evening.

The two birds made it across the Arabian Sea ending their nonstop flight from Manipur covering over 5000 km in five days and 13 hours.

The visit by Amur Falcons to Somalia coincides with the arrival of swarms of desert locust that is currently threatening croplands and pastures in Somalia.

“From termites in NE India to locusts in Somalia, Amurs truly are biocontrol agents,” Tamenlong Forest Division of Manipur said in a post on its Facebook page.

Amur falcons are small migratory birds of the size of a pigeon. Suresh Kumar said the birds breed in northern China.

The pensioners who could not submit their life certificates till November 30 deadline, would get pension every month till...
Read more
National

Agency to serve a notice for the third time after he failed to turn up at its office twice The Enforcement Directorate (ED) is...
Read more
National

Amid the ongoing stand-off between India and China, the Marine Commandos (MARCOS) of the Indian Navy have been deployed in the Pangong lake area...
Read more
Trending