Reactions to Diego Maradona’s death: Diego is eternal, says Messi in his tribute 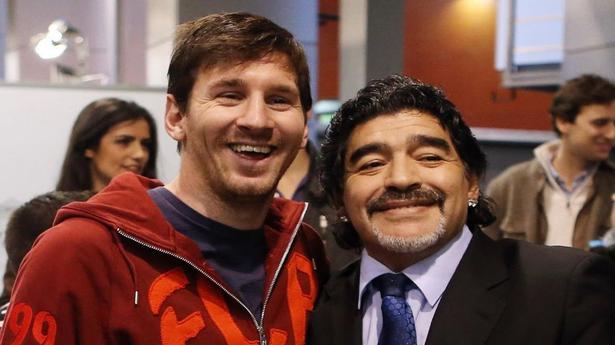 Football great Diego Maradona’s death triggered an outpouring of emotional tributes, with his friends and admirers expressing sorrow and surprise. Maradona, aged 60, died of a heart attack at his home in the outskirts of Buenos Aires in Argentina.

Also read: Remembering Maradona, the Argentine footballer in the pantheon of excellence

Beloved in his homeland after leading Argentina to win the 1986 World Cup and adored in Italy after taking Napoli to two Serie A titles, Maradona was a uniquely gifted player and charismatic figure, but also battled demons off the field.

Here is how the football world reacted:

Diego is eternal, says Messi in his tribute

Argentine footballer Lionel Messi, who has referred to Maradona as his idol, referred to this as a very sad day for football.

“A very sad day for all Argentinians and for football. He has left us but he isn’t going anywhere because Diego is eternal. I’ll remember the lovely moments I experienced with him and I send my condolences to his family and friends. Rest in peace,” he wrote on Instagram.

An unparalleled magician. This was Cristiano Ronaldo’s tribute to Maradona. The Portugal and Juventus footballed took to Instagram to share his thoughts.

“Today I say goodbye to a friend and the world says goodbye to an eternal genius. One of the best of our times. An unparalleled magician. He leaves too early but leaves a legacy without limits and a void that will never be filled. Rest in peace. You will never be forgotten,” he wrote.

You’ll always be in our hearts, says Argentina football association

Argentina football association, which has a long-standing relationship with Maradona, conveyed their “deepest pain” over Diego’s demise.

“Argentina’s football association, through its president Claudio Tapia, shares its deepest pain over the death of our legend, Diego Armando Maradona. You will always be in our hearts.”

Italian soccer club Napoli said on Wednesday the death of its former star Diego Armando Maradona was a “devastating blow” for both the city and the club.

“We are in mourning,” said club spokesman Nicola Lombardo. “We feel like a boxer who has been knocked out. We are in shock.”

“The world awaits our words but there are no words to describe the pain we’re going through. Now is the time to grieve,” the club’s official Twitter handle read.

Maradona played for Napoli between 1984 and 1991, helping the city win its first Serie A league title.

Will kick a ball together in heaven, says Pele

Brazilian football great Pele told Reuters that he has lost a friend.

“Sad news to lose a friend like that. May God give enough strength to his family. For sure, one day we will kick a ball together in heaven,” he said in a statement.

Sharing the iconic photo of Maradona in an Argentina jersey holding up the World Cup, Pele wrote on Twitter that the world lost a legend.

“What sad news. I lost a great friend and the world lost a legend. There is still much to be said, but for now, may God give strength to family members. One day, I hope we can play ball together in the sky,” he wrote.

Pope Francis remembers soccer legend and fellow Argentine Diego Maradona with affection and is keeping him in his prayers, the Vatican said, and official Holy See media called him “soccer’s poet”.

Maradona met the pope several times at the Vatican after Francis was elected in 2013 as Latin America’s first pope.

“The pope was informed about the death of Diego Maradona, he recalls the times he met him in these past years with affection, and he is remembering him in his prayers, as he did in the past days when he was informed about his condition,” Vatican spokesman Matteo Bruni said.

“Argentinian football legend Diego Maradona was like a magician with the ball at his feet. Football has lost an invaluable gem today. His glorious legacy will forever have a place in football history. Rest in peace,” he tweeted.

One of Indian football’s greatest names I.M. Vijayan posted a short message on his Twitter handle.

“RIP God of football,” he said.

Boca Juniors football club, where Maradona played from 1981-82 and 1995-97, kept their message short and heartfelt.

“Eternal thanks. Eternal Diego,” the club wrote on Twitter.

Argentine football star Diego Maradona balances a football ball on his head as he walks off the practice field following the national team’s practice session in Mexico City.

Barcelona football club, where the Argentine played from 1982-1984, referred to him as an icon of world football.

“FC Barcelona expresses its deepest condolences regarding the death of Diego Armando Maradona, a player for our club and an icon of world football. Rest in peace Diego. Thank you for everything,” the club wrote.

My hero no more, says Ganguly

“My hero no more ..my mad genius rest in peace ..I watched football for you,” former India captain and BCCI president Saurav Ganguly, who has always termed the Argentine genius as his first sporting hero, tweeted.

Ganguly had played with Maradona in a charity match when the icon came to Kolkata in 2017.

Batting great Sachin Tendulkar added, “Football and the world of sports has lost one of its greatest players today. Rest in Peace Diego Maradona! You shall be missed.”