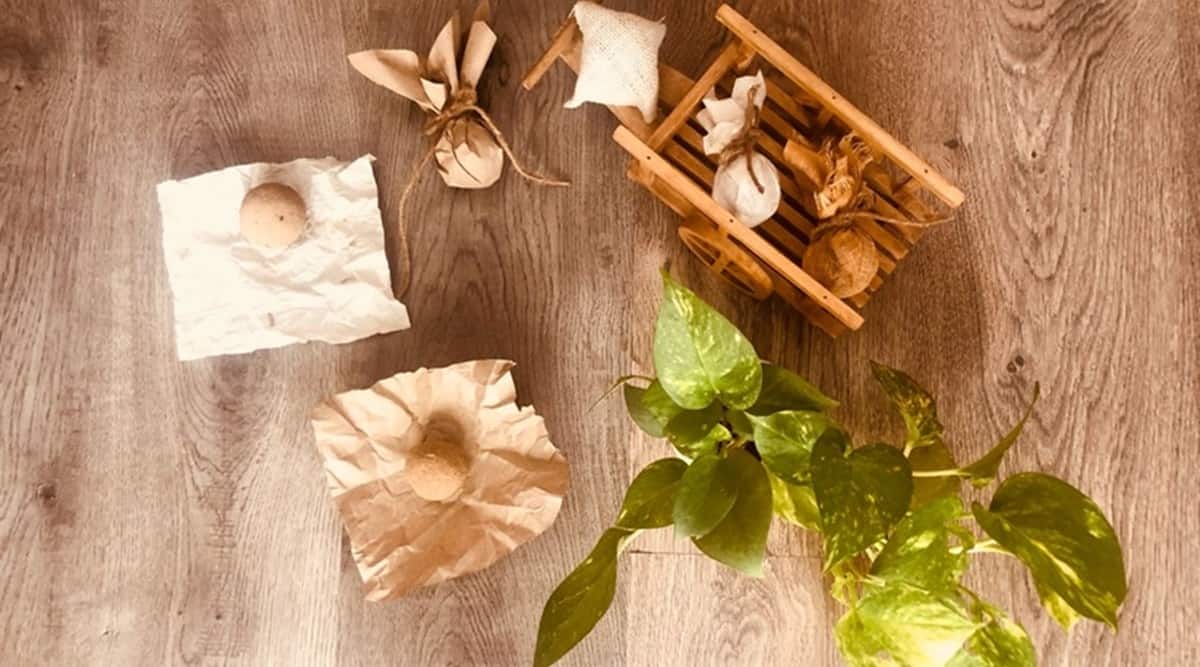 When the skies turn hazy with pollutants and millions gasp for breath, it’s time for a Diwali rethink on how to combine celebration with caution. And some innovators are ready with at least one answer ‘seed crackers’ that burst not with sound and light but flowers, fruits and vegetables.

So imagine, not crackers exploding into a thousand ephemeral stars in the night sky or bursting on the ground with a deafening boom but ‘rockets’ blooming into marigolds, ‘anaars’ sprouting into amaltas or a ‘charkha’ releasing an onion sapling.

It’s a paradigm shift from the de-rigeur firecrackers but ‘seed crackers’ are the perfect solution, particularly in a pandemic year when the high levels of pollutants pose a severe threat to coronavirus patients, entrepreneurs said as the National Green Tribunal on Monday imposed a total ban on firecrackers across the Delhi-NCR region till November 30.

Roshan Ray, founder of Seed Paper India, is among those experimenting with seed crackers, eco-friendly if a little pricey.

After reading about continuously spiking air pollution post-Diwali year after year and the respiratory problems caused by it, Ray decided that a change of mindset was required and went back to the drawing board to reinvent Diwali.

“When people think of firecrackers they associate it with burning and smoke and sound. So we need to change people’s mindset that crackers don’t need to be burst but they can be grown into different plants. We need to understand that we can celebrate without harming the environment,” the Bangalore-based Ray told PTI.

“They are shaped like the usual firecrackers including ‘sutli bomb’, ‘hydrogen bomb’, and ‘anaar’ for the sake of a nostalgic feel, but the seed crackers don’t burst. They grow into various vegetable plants,” the 36-year-old green entrepreneur said.

It’s a nascent business but growing, slowly and steadily.

From a barely countable number in 2018 to an odd 500 the next year, Ray has managed to sell over 7,000 boxes so far this year. Each box contains seven different types of seed crackers.

“It feels good that people are taking interest in the concept. I know we cannot replace a habit with another just like that. It takes time. I am happy about the progress,” he added.

The seed crackers are made by using plantable seed paper or containing a seed ball inside the cracker, which is usually made by recycled paper. A seed ball, made with paper pulp or soil, provides protection against predators and adverse weather.

While Ray has tried to maintain a visual resemblance to the real firecrackers, Tanmay Joshi from Gram Art Project decided to go beyond the nostalgic value and send a message through his seed crackers.

His Diwali rocket can turn into a climber laden with cucumbers instead of bursting into a cloud of poisonous smoke for momentary joy. And a ‘zameen chakkar’ rises from its ashes to become a red onion.

“People were unable to find fun in seed crackers. They were unable to connect. So we decided to make the design meaningful in one way or another,” Joshi, who operates from Paradsinga village in Madhya Pradesh’s Chhindwara district, said.

Buried upside down, the rocket’s ‘leg’ gives the initial support to a climber like cucumber to grow.

“It is symbolic in the sense that a rocket bursts in the air and gives joy to people for a few seconds, but this cucumber rocket will feed a family for a few months,” he added.

The knowledge of Indian traditional farming gave Joshi the idea to add an action relatable in the context of Diwali. — a ‘Phoenix chakkar’ that contains an onion seed ball.

“You have to burn this ‘Phoenix chakkar’ to get ash, which is traditionally used as a potassium supplement in onion cultivation, and cover the burnt residue with soil, water regularly. Then see this ‘chakkar’ rise from the ashes, just like a Phoenix, to transform into an onion sapling,” Joshi said.

His company has also come up with an eco-friendly alternative of an ‘anaar’ that sprouts into the beautiful amaltas. While the traditional ‘anaar’ creates a cascade of sparks with toxic smoke for a few seconds, the amaltas tree stands shrouded in a flowing sheet of yellow flowers every summer for years to come. Among the many takers for the idea is Delhi-based photographer Ankit Gautam.

“I have loved firecrackers since childhood, and the air wasn’t so bad till a few years ago. But with the air pollution I stopped buying or bursting firecrackers. Now, I am going to try the seed crackers for sure,” said the 26-year-old, who has grown a green thumb during the lockdown period. However, the price is a deterrent.

Ankita Verma Mehta, a Gurgaon-based HR manager, for instance, said the idea is noble but the cost made him think twice before eventually deciding against it.

“It’s a low cost seed sold at commercially higher prices. It is like seed rakhis I bought for kids at home. These were basic rakhis with two-three seeds and that cost me not less than Rs 300-400,” Mehta said.

The pricing, according to Divyanshu Asopa, founder of 21Fools, will come down after more people start taking interest.

“We make sustainable handcrafted products which are unique because each and every product is manually made, printed and fabricated by our local craftspersons community.”

“The cost can only go down when we hit huge numbers and are able to sell products across different sales channels which we are planning to do by next summer,” Asopa explained. But the trend could well have begun.

For the first time, the makers and sellers of seed crackers like Gram Art Project and 21Fools said, the response has been good as the stock has flown off the shelf.

“We have sold all 1500 packets a week before diwali,” said a beaming Asopa.