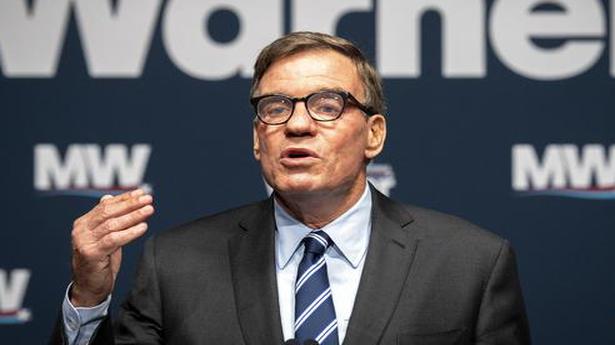 As the dust settles on the U.S. presidential election and a change in administration is imminent, Senate India Caucus Co-Chairs Mark Warner (Democrat) and John Cornyn (Republican) emphasised the role of China in their discussion on the India-U.S. partnership.

In remarks made at an U.S.-India Business Council post-election seminar, held online, the senators talked of a continuing India-U.S. partnership in technology, vaccines, energy (including renewables) and defence. Both Senators disagreed with U.S. President Donald Trump’s decision to drastically cut down U.S. troop presence in Afghanistan.

Responding to a question posed by former U.S. Ambassador to India Richard Verma on the trajectory of the U.S.-China relationship and India’s role, Mr. Warner of Virginia said that under a Biden administration, there would be opportunities to align not just on “traditional economic issues” but also technology issues.

Mr. Warner said that no Indian or U.S. company could alone compete with the Chinese industrial model which he described as ‘authoritarian capitalism’.

“There is no American or Indian company alone that can compete with that …There was a while, maybe a decade ago, when India wanted to kind of skirt not being on the China side or on the American side. But I think, echoing what Senator Cornyn said, we both are nations that operate under rule of law, China does not … And I think I’ve seen increasingly my contacts to Indian government officials is they know they need to come down on the side of rule of law,” Mr. Warner said.

“And I think one of the real opportunities under Biden administration will be to create this coalition of the willing amongst democracies, of which India is the largest in the world, where we can have alignment, not just around traditional economic issues, but around technology issues…”

Mr. Warner said the U.S. pulling out of the Trans Pacific Partnership (TPP) was a mistake and that the U.S. needed to re-engage with the region.

Mr. Biden had earlier this week said the U.S. would engage other democracies on trade, so China did not get the upper hand. The President-Elect’s comments were made in response to a question on whether America would join the Regional Comprehensive Economic Partnership (RCEP), an Asia-Pacific trade deal signed last week by 15 countries including China.

On vaccines, Mr. Warner said India and the U.S., independent of vaccines, needed to look at the sourcing of compounds used in pharmaceuticals — much of which is located in China now.

“I think both India and the United States need to rethink that supply chain,” Mr. Warner said.

Senator Cornyn — who represents Texas, the U.S.’s third largest net energy supplier (the U.S. became a net exporter of energy in January 2019) — highlighted the energy partnership between India and the U.S. India’s purchases of American LNG have been on an upward trajectory under the Trump administration.

The Biden administration places high priority on clean technology and renewable energy (for which there is demand in India).

“While we all understand that our energy mix is always going to be in transition … we’re not going to get away from fossil fuels any time soon but that’s not to suggest we shouldn’t continue to try to innovate and adapt to a cleaner energy outcomes,” Mr. Cornyn said.

On the defence partnership, Mr. Cornyn said countries like India and the U.S. would have to work to support one another in the face of China’s increasing aggression. He said the two countries would continue to resolve issues such as India’s purchase of the Russia S-400 missile defence system, which risks attracting American sanctions.

“But I think those are sort of legacy problems that we’re going to continue to work on to try to resolve, but I see it getting better and better all the time,” he said.

“One of the things America has is friends … like India. China doesn’t have very many friends,” Mr. Cornyn said. He said the strength of the “coalition building” that the Quad (India, Australia, the U.S. and Japan) and the military exercises (Malabar Naval Exercise held this week) represent, needed to be recognised.

On immigration, Mr. Cornyn said he thought there should be a rebalancing towards more of a merit-based immigration system. He said he was not suggesting the elimination of family-based visas. The Trump administration has cracked down on both illegal and legal migration including skilled worker visas (H1-B visas), the bulk of which go to Indian nationals.

Both Senators said they were concerned about Mr. Trump’s sudden decision to pull 2,500 of 5,000 troops out of Afghanistan by mid January.

“Cutting and running in Afghanistan will be a disaster,” Mr. Warner said.

“It’ll be a disaster to our Afghan partners. It’ll be a disaster to the stability of the Afghan government, which we’ve paid [for] dearly with time, treasure and American lives. It would be a disaster for our thirty plus partners who fought side by side with us in Afghanistan. And it should not be dictated by an exiting president’s political timetable.”

The U.S. and Canada are close allies, sharing the world’s longest land border and trading hundreds of billions of dollars worth of goods and...
Read more
National

The organisation claimed there were serious flaws in the floating of the tender, and said it was completely against the Tamil Nadu Transparency in...
Read more
Trending

The U.S. and Canada are close allies, sharing the world’s longest land border and trading hundreds of billions of dollars worth of goods and...
Read more

Sri Lanka has ordered 13.5 million Oxford AstraZeneca coronavirus vaccines in addition to the 500,000 doses gifted by India, and the country may...
Read more

Yamani steered the kingdom through the 1973 oil crisis; was among those taken hostage at OPEC headquarters in Vienna in 1975 Ahmed Zaki Yamani,...
Read more

Relationship with China is one of ‘strong competition’: White House

“We believe the relationship with China is one of strong competition. We want to come to that relationship from a position of strength,” said...
Read more
Bharat News