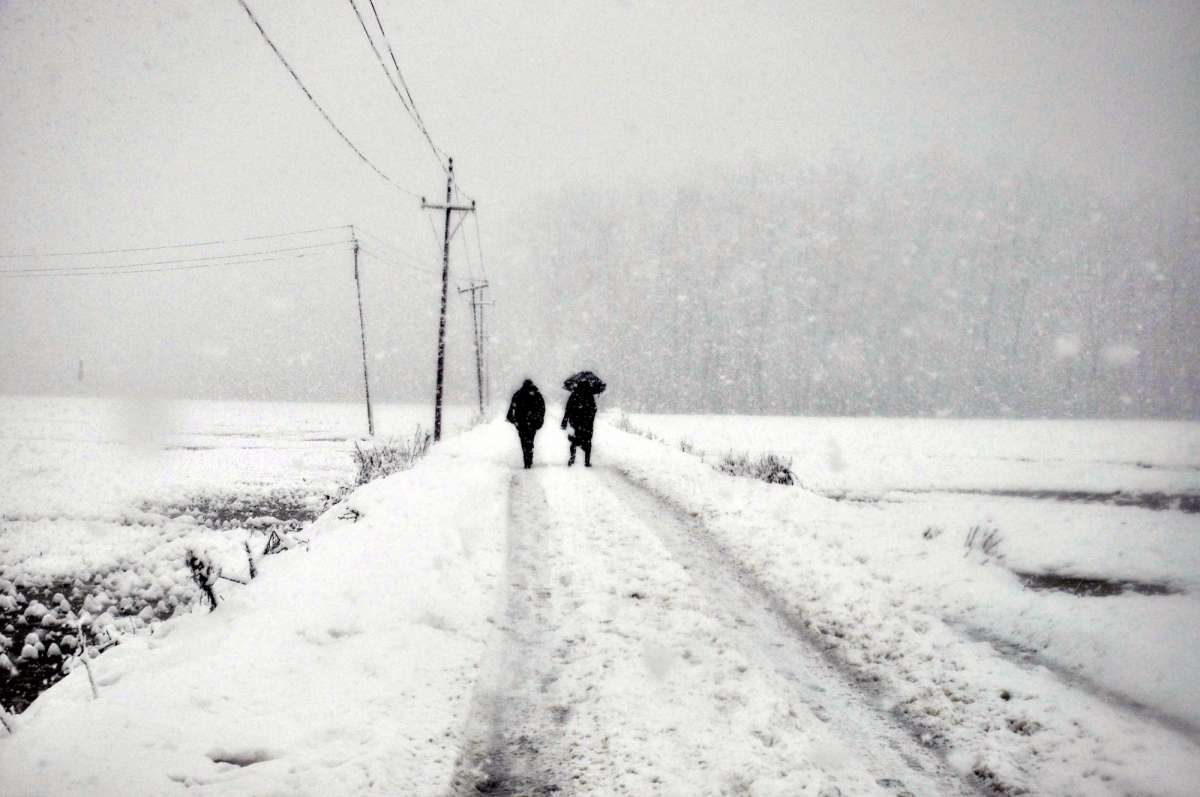 It’s time for the people of Kashmir to bring out their traditional Pheren (tweed over garment) Kangris (fire-pot oven in a basket of willow wicker) wishing each other Sheen Mubarak (Happy Snowfall). The higher reaches of the Valley received a fresh spell of snowfall of the season. This was the first fall in the inhabited areas of the valley, including Gulmarg and Sonamarg tourist resorts.

Snowfall at hill stations like Gulmarg and Pahalgam are bringing the hope of revival of tourism in the area which has been severely hit for most of the year due to the coronavirus pandemic. The Srinagar-Jammu highway has been shut down due to bad weather. There is a considerable dip in the temperature as well.

The Mughal Road, an alternate link between the Kashmir Valley and the rest of the country, was also closed for vehicular traffic on Saturday following snowfall, officials  said as per reports.

The road, connecting the twin districts of Poonch and Rajouri in the Jammu region with south Kashmir’s Shopian, was closed as a precautionary measure in view of snowfall in the high altitude Peer Ki Gali and adjoining areas, they said.

A few inches of snow had accumulated on the ground, rendering the road unsafe for vehicular traffic, the officials said, adding given the prediction of moderate to heavy snowfall, the road was closed as a precautionary measure to avoid any untoward incident.

The road usually remains closed for winter owing to heavy snowfall in the Peer Ki Gali area. “Subject to fair weather and good condition of road, only load carriers carrying fresh fruit would be allowed from Shopian towards Poonch between 11 am to 4 pm on Sunday,” reports quoted a traffic department official.

Earlier, the Indian Meteorological Department (IMD) predicted heavy snow and rain in Jammu and Kashmir and Ladakh from November 13, Friday for the next two days.

The IMD said that active western disturbance is most likely to affect Jammu & Kashmir and Ladakh as well as its surroundings from the evening of November 13 to 15, causing widespread moderate to heavy snowfall and rainfall in both areas.

The department has forecast heavy snowfall and rain in the upper reaches of the Kashmir Valley – Gulmarg, Sonamarg, Baramulla, Qazigund, Bandipora (Gurez and Tulail Valley) and Kupwara (Karnal Sector), Shopian, Qazigund-Banihal, and Pir Panjal areas of Jammu. Ladakh region will also get affected, where the weather in Drass Gumri and Meenmarg and Zanskar will also get worsen.

Leaders of the DMK, Congress, MDMK and others expressed grief over the veteran leader’s demise DMK President M.K. Stalin and...
Read more
National

Fiery speech in Madurai was D. Pandian’s last one

No one who wants to make Tamil soil a slave for someone can set foot on the land, he had said He was brought...
Read more
Entertainment

WandaVision, Marvel Studios’ foray into television, has taken the world of superhero TV by storm. The show, with its distinctive structure, tone and story...
Read more
National

Telangana Congress stepped up its offensive against the TRS government meeting the Governor, Tamilisai Soundararajan and demanding that a court-monitored CBI enquiry be launched...
Read more